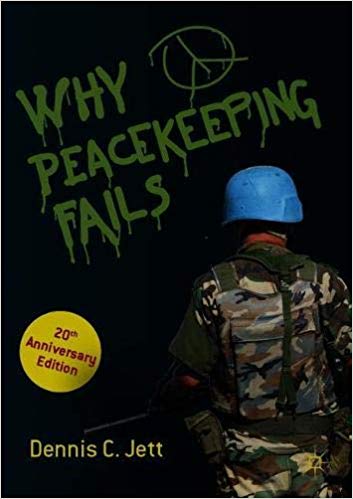 In DiA’s mid-week article, Dennis Jett reflects on failures of peacekeeping missions in Africa and why a focus on improved governance can be far more effective.

The United Nations was only three years old when it launched its first peacekeeping mission in 1948. On average, the UN has initiated one new operation a year since then. Over that time, peacekeeping, and the wars to which it has been applied, have evolved. That evolution has profound implications for Africa — and they are not good.

The earliest peacekeeping missions were relatively straightforward as they followed wars between countries over territory. The missions then became highly complex as they attempted to address the aftermath of civil wars. In the operations launched most recently, all of which are in sub-Saharan Africa, they have become missions impossible. That’s because the tasks assigned to peacekeepers are ones they will never be able to fully accomplish.

To understand why requires considering each of these three stages and how the expectations of peacekeeping have changed. All three stages are represented in the current 14 U.N. peacekeeping missions, which employ nearly 100,000 soldiers, police and civilians at an annual cost of almost $7 billion.

The first stage, in response to wars over territory, can be described as classical peacekeeping. Peacekeepers are given the uncomplicated assignment of monitoring a demilitarized zone in the disputed territory. That allows both sides to have the confidence that neither is taking advantage of the cease-fire to improve its military position.

Ironically, that kind of war, which the UN was established to help prevent, is very rare today. Those that do exist seem endless, however. That is because a permanent peace requires drawing an imaginary line on a map called a border, which can be politically dangerous. In such situations, the politicians prefer the status quo and refuse to negotiate seriously. As a result, the peacekeepers provide only the illusion of peace and are unable to bring their missions to an end. Thus, the six oldest of the 14 current missions represent a combined total of three centuries of classical peacekeeping experience. They are located in and around Israel, and in Kashmir, Cyprus and the Western Sahara. There is no political process underway in any of them that has a real chance of resolving the underlying territorial dispute.

The second stage involves missions that are multidimensional, so-called because the peacekeepers are given a wide variety of tasks to help countries recover from civil wars. Once a cease-fire is established, peacekeepers can be sent with their long list of goals to help the peace become permanent. These can include demobilization of former combatants, reintegrating them into civilian life, forming a new national army that is not loyal to only one faction, helping refugees return to their homes, providing humanitarian aid and development assistance to restart the economy, and holding elections in a country with little-to-no democratic experience.

While the United Nations has had some successes in multidimensional peacekeeping missions, they are, at least for the moment, largely a thing of the past. Of the current missions, only two — in Kosovo and Haiti — are multidimensional. It would be more accurate to call them unidimensional, because their mandate has been reduced over the years to the point that they are now only attempting to professionalize the police.

The remaining six operations—protection and stabilization missions—exemplify the third stage. In them, peacekeepers are asked to protect civilians and aid governments threatened by violent extremism. They are all in sub-Saharan Africa and are the youngest of the 14 missions underway.

At the risk of being tautological, peacekeepers are bound to fail if there is no peace to keep. When a cease-fire is negotiated, peacekeepers can do their work. Without one, they are either powerless bystanders to the violence or they must engage in combat. That requires the international community to try to impose a peace and to be willing to have the peacekeepers inflict and take casualties.

To make matters much worse, the five countries where these missions are taking place—Mali, Sudan, South Sudan, the Central African Republic and the Democratic Republic of the Congo—have governments that are among the most corrupt, repressive and incompetent in the world. One need only to look at their rankings by Transparency International, Freedom House and the Ibrahim Index to confirm that. Because of their nature, these governments are not particularly interested in protecting their own citizens. Their armies and police exist mainly to protect the regime in power. Enhancing the capability of these security forces alone will likely be used more to suppress democratic opposition than extremists.

If the United States has proven one thing in its experiences in Vietnam and Afghanistan, it is that even the most powerful military force in the world cannot prevail if its local partner is corrupt and incompetent. And the peacekeepers are far from powerful because wealthy nations with capable armies are unwilling to provide troops for this most dangerous and difficult type of peacekeeping. The members of the OECD, the rich countries club, provide only 3 percent of the soldiers for these missions — even though they pay 86 percent of the overall cost of peacekeeping.

These missions will therefore fail, because peacekeeping has become a way for rich countries to send the soldiers of poor countries off to deal with conflicts the rich countries do not care all that much about. It also reflects the preoccupation with terrorism and the inability to see anything other than a military solution.

There is another way, but it is doubtful that the international community has the will, attention span and unity to undertake it. In 2017 the UN Development Program interviewed 495 young African men who had voluntarily joined violent extremist groups. The study found they were motivated by a sense of grievance toward, and a lack of confidence in, their governments. For them, the extremist ideologies were a way to escape a future without hope. The study concluded that improved governance was a far more effective response to violent extremism than a military one.

The governments in these five countries will not lessen their corruption, repression and incompetence, however, simply because it is the right thing to do. These countries are as underdeveloped politically as they are economically and have weak legislative and judicial branches, civil society and press freedom. The incentive to govern better will therefore have to come from outside forces. The international community could provide that incentive by applying substantial and consistent economic and political pressure. The five countries should be declared de facto failed states, and international organizations put in charge of their finances. Any aid or trade with them should be made contingent on the attainment of better governance, human rights and adherence to democratic norms.

To do that effectively, however, the most powerful countries and international and nongovernmental organizations would have to make peace the top priority and not allow sovereignty to be used as a shield by autocrats. Thus far those nations have preferred to dump the problem in the UN’s lap and blame the peacekeepers when they fail to achieve what they cannot accomplish.

Dennis Jett is a professor of international affairs at Penn State University and the author of “Why Peacekeeping Fails.”