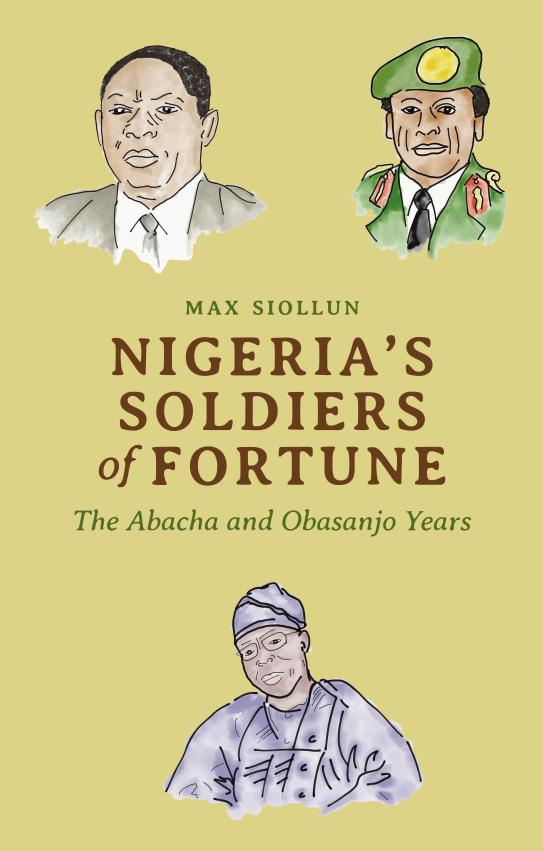 Max Siollun provides a compelling summary of the dual destabilizer-mediator role of Nigeria’s military, especially during the military dictatorship years. But, as the military retreats into the background, Siollun show how Nigeria was left to deal with religious fundamentalism, insurgencies and other crises caused by military dictators.

Professor John Paden’s description of Nigeria as “the most complicated country in the world” may be accurate. Yet Nigeria’s history is rarely told. Its bewildering sectarian cleavages including ethnicity, religion, and geography often make it impossible for a reliable narrative of any historical event to emerge without it being tainted by competing urban legends, personal beliefs, and conspiracy theories. Nigeria’s soldiers of fortune: The Abacha and Obasanjo years, is the third of my book trilogy on Nigeria. It addresses the lacuna in Nigeria’s historical narrative by tackling a seminal decade (1993-2003) of crisis that has been dismissed as a dark age for the country.

There are three overriding themes in this book. First, there are few countries where the country’s fate and that of its army are as tightly interwoven as Nigeria. Military rule by four successive military dictators ended in 1999 not because the military were chased out of power by street protests, but after the military was chastened by the realisation that they had brought themselves and their country to ruin. As one senior officer informed me: “Every right-thinking [military] officer knew we had overstayed our welcome and had reached the end of the road.”

Secondly, rather than being viewed as an age during which nothing good happened, the military dictatorship led by General Sani Abacha, and the terrifying crises, repression and assassinations during it, led Nigeria to hit a rock bottom moment that caused its military elites to re-assess, modify, and enhance the state’s foundational structures.

Thirdly, although the book is about a nation, Nigeria’s story during this tumultuous decade followed the trajectory of personality-driven conflicts between three captivating protagonists: Moshood Abiola, General Sani Abacha, and General Olusegun Obasanjo. Abiola was the multi-billionaire businessman and friend of successive military governments who was elected president. But then, the army generals who had protected his wealth voided his presidency before it even began. Abacha was the mysterious and reclusive military ruler who oversaw an Orwellian state security apparatus that terrified Nigerians into silence. Prominent pro-democracy activists, including Abiola’s wife were jailed and/or murdered.

The third protagonist Obasanjo embodies Nigeria’s juxtapositions: a former military ruler who emerged from prison to become an unlikely symbol of democracy.

By deploying a chronological narrative, my book follows the military’s rapid descent from an esteemed symbol of national unity which presented itself as “corrective” doctors administering therapeutic political medicine to Nigeria, to a “doctor” that became infected by the ills of corruption, factionalism, and injustice that it came to cure. By the 1990s the “military doctor” was still trying to administer treatment to the civilian patient without the patient’s consent. Most Nigerians are unaware of the torture camps, secret death squads that assassinated the military government’s opponents, journalists and pro-democracy campaigners who were framed, jailed, or sentenced to death by secret military tribunals, or how deeply the intelligence agencies penetrated the society.

Nigeria’s emergence from military despotism in 1999 was remarkable because it was initiated by current and former military rulers who recognised that they had brought the country to its knees and bred a generation of coup addicted officers – waiting in the barracks for their turn to rule. A retired general warned that unless drastic action was taken, “the army is going to destroy Nigeria”.

The book, further chronicles how the military simultaneously played dual roles of destabiliser and national mediator. Generals who plunged the country into crisis also engineered the compromises that led it out of crisis. The battle for power between former friends turned rivals, Abiola (a southerner) and Abacha (a northerner) elevated the south and north’s mutual hysteria and paranoia about each other to a zenith that posed the greatest threat to Nigeria’s unity since the civil war of 1967-1970. Military elites realised that rather than stubbornly cling to the country’s indivisibility as a non-negotiable article of faith (as they had done for three decades), national survival required turning the political conversation away from whether the country should remain united, to a reconsideration of the form of unity under which the country should exist. They successfully nudged the south and north to bargain with each other and reach compromises to share power. .

Nonetheless, the military paid a steep price for its venture into political governance. Although there were few trials for the murders and human rights abuses committed by under military rule, the military was subjected to a form of belated and poetic transitional justice. Beyond 1999 the military has been pre-occupied with confronting malignant and violent consequences of its failed policies in government: insurgencies in the south and north, outbursts of dissident religious groups within Christianity and Islam, and the destruction of the military’s esteem and professionalism. The military is currently deployed on security operations in at least 30 of Nigeria’s 36 states. Most of these crises have their root causes embedded in the military rule years. Accordingly, the military escaped from governing, but not from its consequences.

Nigeria’s soldiers of fortune: The Abacha and Obasanjo years demonstrates that Nigeria’s story is to some extent the story of its military. Modern Nigeria cannot be understood without a corollary understanding of its past military governments. As one NGO observer remarked three years ago: “It appears that without the military, nothing works in Nigeria.”

The book is available from Amazon’s US and UK sites, and also from the bookshops at this link.