Sa’eed Husaini explains why sub-national elections are so important, and how the upcoming contest in Ekiti State can provide valuable clues as to the dynamics and outcome of the next general election.

The southwestern state of Ekiti is one of the smallest of Nigeria’s 36 states but, in terms of presidential politics, might well be one of its most important.  This is true for two reasons.

The first is, in part, a matter of scheduling: in Ekiti state, unlike in most others, governorship polls are held just under a year before —rather than at the same time as—presidential polls. This means that, like with other mid-term governorship elections (in fellow southwestern state of Osun and in southeastern Anambra) the Ekiti polls provide an early indication of important factors which will determine the conduct and outcome of the subsequent presidential race. Chief among these is the question of how prepared Nigeria’s electoral management body, INEC, is to conduct presidential elections; if the one-off midterm polls are poorly organized then, there is a slender hope that next year’s polls— which will be held concurrently across the entire country— will be credibly managed. Relatedly, in a consolidating democracy with a powerful executive such as Nigeria’s, mid-terms governorships also shed light on the extent to which the president is willing to use ‘federal might’ or to tip the electoral scale in favor of his party, as was widely reportedto have happened in the last Ekiti State election in 2014. It is reasonable to expect that a president who fails to play fair in state mid-terms will not hesitate to pull out all the stops (both legal and otherwise) in subsequent presidential polls in which his own seat is on the line. 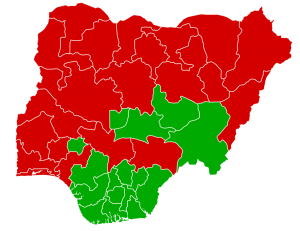 But beyond general issues related to the timing of mid-terms, there is a second reason why the Ekiti State poll in particular could have a dramatic impact on the electoral prospects of Nigeria two leading parties— the ruling All Progressives Congress (APC) and the main opposition party the People’s Democratic Party (PDP)—in the 2019 polls. The reason is this: whichever party wins Ekiti state in the upcoming governorship poll will most likely also take the state in the 2019 presidential elections. This is due to the fact that Nigerian voters tend to vote in presidential polls in favor of the party to which their state governors belong — or put otherwise, that incumbent state governors tend to ‘deliver’their states in presidential polls. Thus, despite the incumbent PDP’s historic loss to the APC in the 2015 presidential and state polls, Ekiti state, under a PDP governor, was able to swim against the national tide.

Crucially, this has also meant that the state is the last remaining stronghold of the former ruling party outside of its southeastern and middle-belt heartlands (see map). This latter factor is a particularly important consideration since constitutional rules require that a presidential candidate must, in addition to a simple majority, also win one fourth of the votes in 24 states in order to be elected president. Thus, even with strong support in its heartlands, if the PDP is completely shut out of the Southwest then it may struggle to meet the technical requirements for winning the presidential race. Cumulatively, these factors suggest a striking possibility: if the PDP is to lose Ekiti state in the upcoming polls, then it may already have sealed its fate to remain the opposition party at the national-level for the next 4 years.

In light of this picture, how is the Ekiti State election likely to play out? To return to an earlier point, the first issue to consider is the extent to which the polls will be conducted in a credible manner and without the undue interference of ‘federal might’. In terms of the conduct of the election, Nigeria’s electoral umpire, INEC though widely praised for its management of the 2015 polls, has had a mixed record under its new management. On one hand, the last mid-term governorship elections held in Anambra state in 2017 were regarded as modestly well conducted and a sign of INEC’s fairness. On the other hand, there have been accusations that INEC permitted underage voting in 2018 Local Government Elections in northern Nigeria, which, the PDP claims, benefitted the APC in these elections and point to INEC’s bias in favor of the ruling party. Its ambivalent performance suggests that INEC’s fairness and capacity will remain a major bone of contention in the Ekiti election.

The influence of ‘federal might’ will also be an important consideration in the upcoming poll. Though President Buhari was praised for his fair play in the Anambra mid-terms in which his party lost, this was also a race held in a traditionally heartland of the opposition where Buhari’s party has not had much of a fighting chance. It is therefore unclear whether Buhari will be willing to leave things to chance in the case of Ekiti where the stakes are much higher. The candidates who are likely to be the front runners make this an even more pertinent question. On one hand, running as the APC frontrunner is Kayode Fayemi, a former governor of the state and a current federal minister. On the other hand, Ayo Fayose, the current term-limited incumbent and one of the most vocal critics of the Buhari administration has endorsed his deputy, Olusola Kolapo, as the PDP candidate for Ekiti. Giving these profiles, the temptation Buhari will face to throw the full weight of the federal government behind Fayemi will be great.

Last but certainly not least, influential in determining the outcome of the Ekiti polls will be the mood of voters in the state. Though Fayemi, while an incumbent of the state was defeated by Fayose in 2014, the latter ran a campaign that was largely personality based; meaning that Fayose’s party may fair much worse in an election in which he is no longer on the ticket. Although too early to make precise pronouncements — particularly in the absence of polling data— it is clear that the incumbency advantage does not decisively favor either camp in the coming polls. Thus, with the likelihood of being a hotly contested election with nation-wide ramifications, the Ekiti polls will be worth paying close attention to.

Sa’eed Husaini is a doctoral student at the University of Oxford.