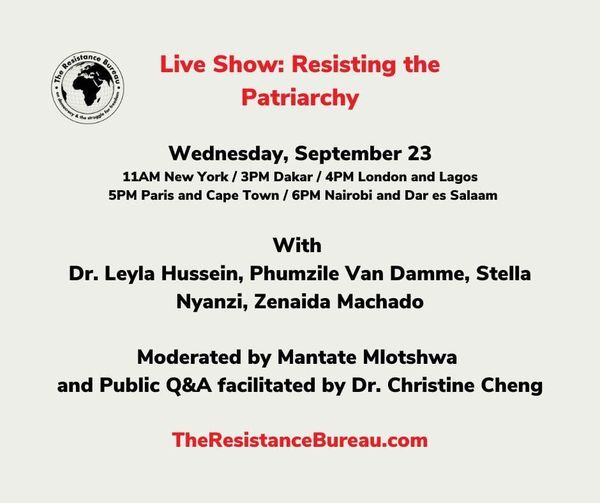 Our sister discussion space/podcast, the Resistance Bureau, has another fantastic show lined up: Resisting the Patriarchy. Check out the brilliant speakers below!

Around the world women leaders are more likely to be the targets of hate speech and sexual assault, as well as less likely to be included in senior government positions. This situation has worsened during the COVID-19 pandemic, which has included a spike in gender-based violence and a disproportionate decline in wage earnings. Yet women have continued to come to the fore as outspoken, courageous leaders to challenge the status quo and to lead where their male counterparts have often hesitated. This all-female episode will shine a light on the incredible work being done to resist the patriarchy in Africa and discuss how the pandemic may present an opportunity to forge more equitable societies.

For more information and to register, go here.

Stella Nyanzi is one of Africa’s most outspoken and fearless voices of change. She recently spent 18 months in prison for publicly criticizing Uganda’s long-ruling dictator, Yoweri Museveni. Her defiance has helped to inspire other pro-democracy and feminist activists across the region. Trained as a medical anthropologist, she is also well regarded as a scholar on sexualities, public health and LGBTQ rights. Among the many honors she has received was the 2020 Oxfam Novib/PEN International Award for Freedom of Expression.

Dr. Leyla Hussein is a Somali-born psychotherapist who has devoted her life to boldly tackling issues like FGM and gender equality. She is the founder of several projects that seek to make the world a safer and fairer place for women and girls. Her current project, The Girl Generation, supports the emotional well-being of activists working with survivors of FGM. She is the recipient of many prestigious awards, including the 2010 Cosmopolitan Ultimate Campaigner Women of the Year Award and has been recognized as one of the UK’s most influential people.

Phumzile Van Damme is one of the youngest members of the South African parliament and is currently the shadow Minister for Communications for the Democratic Alliance (DA), the country’s main opposition party, where she previously served as the official spokesperson. First elected to parliament at age 31, she is passionate about empowering young women and has taken a firm stand against entrenched power structures in South Africa, including against the major PR firm Bell Pottinger, for stoking racial divisions in the country.

Mantate Mlotshwa is a passionate advocate of gender equality, equal rights and civil liberties. The Project Lead for Arts4Change under Magamba Network, she has earned a reputation for speaking her mind and promoting positive messages of liberation and emancipation in Zimbabwe and beyond.

Dr. Christine Cheng is an award-winning researcher and gender equality advocate who sits on the Advisory Board of Women in Foreign Policy and comments on international affairs for the BBC, Wall Street Journal and al Jazeera. A lecturer in War Studies at King’s College London, her book on Extralegal Groups in Post-Conflict Liberia won the 2019 Conflict Research Society’s Annual Book Prize, while her TEDx talk on women in politics issued a clarion call for more women in elected positions.