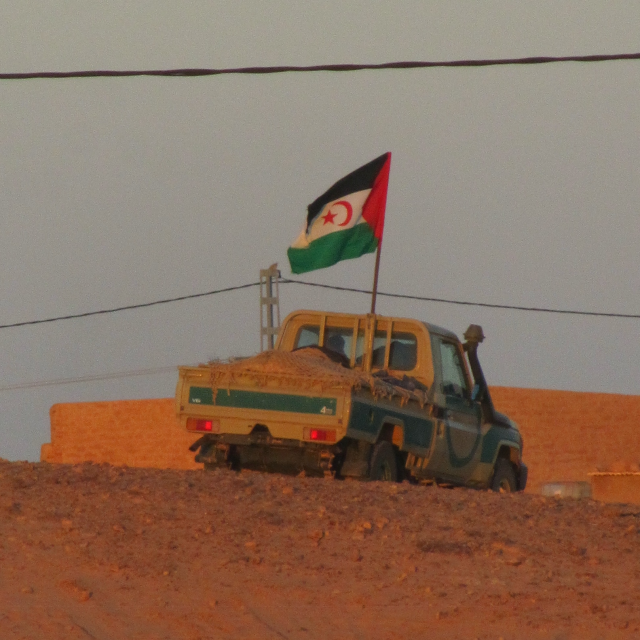 Joanna Allan explores the roots of resistance in Western Sahara, reflecting on how oil, phosphates and the struggle against colonialism have played out in a state that is all too often overlooked in contemporary coverage of African politics.

my brothers and sisters,

is not for sale.

The green of my land,

as the beauty of

in the eyes of the

The phosphates you desire,

they will cause you harm,

not even if they were for sale,

will you be able to buy them.

So go the first lines of a poem by Fatma Brahim, who composed the work in 1976 as she and her daughters left the destroyed refugee camp of Um Dreiga, Western Sahara, after the Moroccan air force napalmed it. The poem, titled “Sahara is not for sale,” has become a classic revolutionary song for Saharawis, who are still pursuing their struggle for independence. It succinctly draws attention to a central aspect of the Western Sahara conflict, and an increasingly key demand made by Saharawi pro-independence activists: natural resources.

Prior to the 1975 Moroccan invasion of the territory, Western Sahara had been known as ‘Spanish Sahara.’ As well as exploiting the territory’s rich fisheries, the Spanish built a phosphate mine in their North African colony, which is still the world’s number one source of phosphates. The Saharawi pro-independence movement, known as the POLISARIO, was formed in 1973. One of the first targets of its acts of guerrilla sabotage was the conveyor belt (the longest conveyor belt in the world, incidentally) that carries phosphates from the mine to the seaport.

The wider Saharawi population, which, according to a 1975 UN Visiting Mission, overwhelmingly supported POLISARIO’ calls for independence and rejected integration with any neighbouring country, were conscious of their country’s resource wealth. If one leafs through colonial government documents in the archives in Alcalá de Henares, Spain, it is also clear that civil servants at all levels of the colonial hierarchy were aware of the Saharawi rejection of resource exploitation. For example, in October 1974 a disgruntled Spanish civil servant wrote back from El Aaiún (Western Sahara’s capital) to her head office in Madrid of a 15-year-old Saharawi schoolgirl who had gathered together all her female classmates to plan a break-time protest against the Spanish presence in the territory. The girls complained that the Spanish had done nothing in the territory apart from ‘discovering phosphates’ and ‘taking them away’. But Saharawi protests could not stop the final sale of Western Sahara. Rather than submit to UN calls for decolonization, Spain signed a secret and illegal agreement with Morocco and Mauritania, in which it transferred Western Sahara to its neighbours in exchange for rights over fisheries and a 33% of profits from the phosphate mine.

As Spain sneaked back north with a heavy wallet, Mauritania and Morocco invaded Western Sahara. Dozens of thousands of Saharawis fled east, eventually ending up in huge refugee camps in Tindouf, Algeria, which was declared a state-in-exile by the POLISARIO in 1976. Although POLISARIO defeated Mauritania in 1979, Morocco today still occupies most of the territory of Western Sahara. This occupation is brutal and repressive: Moroccan-occupied Western Sahara regularly makes the annual ‘worst of the worst’ list of the international civil liberties NGO Freedom House. Yet Saharawi civilians that did not flee to Algeria have maintained nonviolent resistance against the occupation for the last forty years.

The resistance began clandestinely. Activists distributed pro-POLISARIO leaflets in secret, hid their colleagues in safe houses and scrawled slogans in favour of independence on walls. As activists gained confidence, tactics became more public. The first large-scale demonstration was upon a UN visit in 1987, which saw a hundreds-strong protest in favour for respect of Saharawi human rights. The participants of the demonstration were forcibly disappeared over the following nights and days. Whilst some died in secret detention centres, others were released upon the 1991 ceasefire between Morocco and POLISARIO, brokered by the UN on the promise of a still unrealized self-determination referendum on independence for the Saharawis.

1999 saw a Saharawi intifada in favour of human rights involving thousands, then in 2005 there was a still larger intifada, this time calling for independence. The largest uprising since has been the 2010 Gdeim Izik protest camp, in which some 20,000 Saharawis spent a month at a camp in the desert calling for jobs, independence and an end to natural resource exploitation.

Why have demands for an end to natural resource plunder risen to prominence?

First, there is the danger factor. The fear of persecution stopped many Saharawis in the occupied territories from raising the issue of natural resource exploitation and indeed independence until at least 2005. Malainin Lakhal, co-founder of Saharawi Natural Resource Watch, explains:

The peaceful resistance has always progressed little by little in accordance with the possibilities offered, and with careful progress building on the past experience. Before, it was very dangerous to show one’s political views, so the activists used social, economic and cultural claims to create an atmosphere of resistance in the society. Now, I think that we are in a phase in which the struggle is on at all levels, and intentionally.

Secondly, there is at best a lack of information, and at worst an orchestrated disinformation campaign by involved corporates and governments, on the issue of resource plunder in Western Sahara. For many Saharawis, this means, in the words of one activist, that ‘we just didn’t know about the plunder until very recently, so we have only just started to focus on it’. For the international community, this means not knowing that the products in which they invest or that they consume are from Western Sahara at all. If I pop down to my local supermarket (unless my local supermarket is the Coop, which refuses to sell plundered produce), I can buy tomatoes, lettuce and tinned fish from occupied Western Sahara, but it will be labelled as Moroccan produce. Or, to use an example local to the birthplace of the DiA blog, Edinburgh-based Cairn Energy, a member of the first consortium to drill for oil in Western Sahara’s coastal waters, erroneously continues to insist that its activities take place in Morocco and denies any ethical or legal wrongdoing. Unfortunately for Cairn Energy, ethical investors, not least the world’s largest sovereign wealth fund, are showing their disagreement by way of divestments.

This brings us to a third reason behind the ‘turn’ towards natural resources amongst Saharawi demands: success is inspirational and attracts further activists. Despite working with Western Sahara Resource Watch and Western Sahara Campaign UK myself for several years, I have quite literally lost count of the numbers of companies that Saharawi activists, solidarity activists and the POLISARIO have collectively pushed to divestment between the initial divestment of French oil giant Total in 2004, to this month’s departure of the largest international company present in Western Sahara, Swiss Glencore. Other recent major successes include the POLISARIO’s December 2016 defeat of the European Union in the latter’s own Court of Justice, which means that the EU cannot legally continue to allow the inclusion of occupied Western Sahara in its trade deals with Morocco, and, making use of this legal success, the South African government’s seizure of a cargo of plundered phosphates on their way from Western Sahara to New Zealand earlier this month. These successes led to big celebrations in the Saharawi refugee camps, further publicising the significance of the natural resources issues to the (ir)resolution of the Western Sahara conflict.

Social media, communications and education are other factors that Saharawis highlight in provoking the ‘turn’ to the prioritisation of natural resources-related demands in the Saharawi resistance. Saharawis began to have mass access to internet, mobile telephones and social media from 2005 onwards, allowing for increased communication with the outside world and new routes for campaign dissemination. The Saharawi Campaign Against the Plunder has been particularly innovative in its use of social media, which is illustrated well by its You Tube campaign against Irish/British San Leon.

What does this renewed focus on natural resources mean for the future of Western Sahara?

Some Saharawis see the battle over natural resources as a ‘third route’ to independence where UN-brokered talks between Morocco and POLISARIO are in stalemate and war could be suicide. Says one young activist working on the issue of natural resource exploitation: ‘I can see that the diplomatic path is going nowhere, and so some young people want to go back to war. I don ’t want war, and I see natural resources as another possible path towards our independence’.

But this is not just about hope for the long-suffering Saharawi population. To understand why an end to natural resource exploitation could be a turning point in the conflict, we must first think about why Morocco still occupies Western Sahara. The initial 1975 invasion, which is still celebrated annually in Morocco on Green March Day, was arguably a great show of Moroccan patriotism that helped to unite the population and boost then-King Hassan II’s popularity. Today, though, the occupation is less popular amongst Moroccans – it’s an expensive business. No less than one third of the entire Moroccan population of the occupied Western Sahara are soldiers, and on top of this are unknown numbers of police, gendarmes, Interior Ministry agents, royal secret services, plain-clothes agents and civilian informers, all of whom must be paid by the state.

But the cost of the occupation is currently counterbalanced by profits from resource exploitation, which is worth literally hundreds of millions of pounds on an annual basis. If Morocco could no longer make money from the occupation, there would arguably be a substantial incentive for the country to follow the UN decolonization process. In other words, an end to the plunder could mean an end to the occupation.

On the other hand, despite the aforementioned recent successes in terms of divestments and legal actions, the Saharawis’ battle is far from over. Companies, not least the green energy sector, continue to invest in occupied Western Sahara, whilst the European Commission is rallying member states to ignore the EU Court of Justice’s aforementioned ruling. Meanwhile, Saharawis on the frontline of natural resource activism are persecuted. For example, Sidahmed Lemjiyed, President of the Saharawi Committee for Protection of Natural Resources, has so far spent seven years in a Moroccan prison serving a life sentence for his alleged role in organising the 2010 Gdeim Izik protests. Whilst he and 23 other Saharawi political prisoners are expecting, this month, a retrial in a civilian court (their original sentence was handed down by a military court despite the accused’s status as civilians), their Saharawi compatriots regularly demonstrate in the occupied territories, the camps and Spain to show support. The lyrics of a cherished song can be heard rising from the crowds at such events: “The Sahara/my brothers and sisters/is not for sale.”