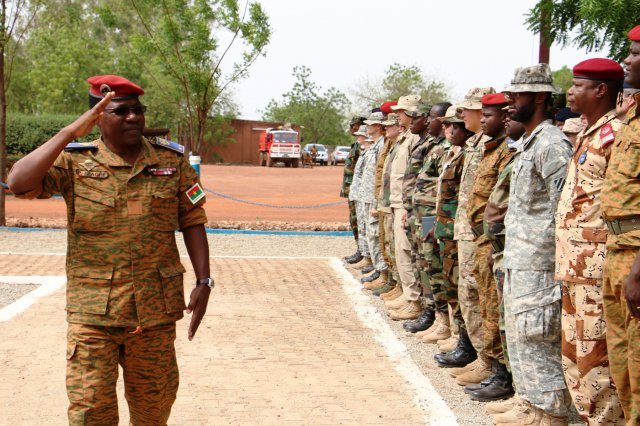 Maggie Dwyer pushes us to reconsider how we view mutinies in Africa. Soldiers are a part of the political landscape, she argues, and their actions need to be seen in the context of broader political moments and movements in society. Maggie is a Research Fellow at the Centre of African Studies at University of Edinburgh. She can be followed on Twitter at @MagDwyer.

Former mutineers in Nigeria and Burkina Faso have recently expressed high hopes about their prospects under the newly appointed presidents of their respective countries. Such expectations demonstrates the political nature of mutinies and contradict the idea that mutinies are primarily internal military matters.

In Burkina Faso, former soldiers held a press conference in April 2015, asking the new transitional government to reinstate soldiers who were dismissed following mutinies in 2011. They explained that the revolts were related to widespread discontent in the ranks at the time. They also objected to being labelled criminals. Likewise, several different groups of mutineers in Nigeria have publicly called for President Buhari’s attention. Soldiers jailed and fired after a protest over non-payment of their peacekeeping wages in 2008 have asked to be reinstated. They believe that Buhari’s military background will lead him to appreciate the ‘enormity of the injustice’ that they face. Similarly, the lawyer for Nigerian soldiers convicted of mutiny and sentenced to death in 2014 has stated that he is confident that Buhari will conclude that the actions of the soldiers was due to ‘negligence of the Nigerian state.’

Essentially, these groups of soldiers are asking for the mutinies to be contextualized. They want their actions to not be seen as merely indiscipline but as part of wider issues within the military and the state. This is in contrast to the rigid way that military hierarchies typically view indiscipline.

By documenting the occurrence of mutinies across time, as well as interviewing mutineers in three West African states, my research has found that political context is an important factor in assessing when and why the revolts occur. I argue that material demands (pay, improved housing, etc.) made by mutineers are often accompanied by a broader sense of injustice. Soldiers regularly highlight what they believe to be unfair treatment or irresponsible behaviour by superiors in a military context. This sense of injustice is often closely linked to politics at the national and international level. Rather than viewing mutinies as simple ‘pay revolts’ my work ties indiscipline to national politics and international trends such as peacekeeping missions.

My recent article titled ‘Borrowed Scripts: Democratisation and Military Mutinies in West and Central Africa’ explains that soldiers are often inspired to revolt by similar protests in the civilian realm. This is demonstrated by an examination of mutinies that occurred during democratization protests in the 1990s. It shows that soldiers have often ‘borrowed a script’ from the civilian sphere by expressing their grievances with popular political language and themes of the time. During this era, for example, soldiers began to incorporate language of human rights, accountability, and civil liberties into their public expressions of dissatisfaction, although such rhetoric was reconfigured into their own military context.

As mutinies tend to be carried out by junior soldiers, my works focuses on the lower levels of the military hierarchy. While I centre on the issue of indiscipline, my findings move beyond a narrow view of military revolts to demonstrate how junior soldiers are part of society and influenced by many of the same political currents as the civilian population.

In some ways, it is surprising that soldiers in the 1990s drew inspiration from contemporary civilian protests, given that militaries in many parts of Africa were seen as being in direct opposition to the growing demonstrations. However, the division between civilian protestors (particularly urban youth) and the junior ranks of the military is often blurred. African militaries regularly have a high concentration of troops in capital cities – which are often the site of civilian political actions – and military housing shortages mean that junior soldiers often live outside of barracks, amongst the civilian population. Moreover, junior soldiers in the 1990s listened to the same radio broadcasts and attended the same religious ‘political sermons’ as the broader civilian population. This is all in addition to the personal networks with friends and family outside of a military context. It is therefore understandable that soldiers picked up many of the popular political sentiments that were expressed in the civilian population, particularly through mass protests.

This overlap between themes in civilian mass protests and mutinies is not limited to the 1990s. The Burkina Faso mutinies in 2011, for example, followed widespread civilian protests and many of the soldiers’ grievances and language mirrored those of the civilians.

My findings, along with recent statements by African mutineers, challenge the common idea that mutinies are a purely military matter to be interpreted by military code in a court martial. To understand mutinies we must view the soldiers and their actions as part of a wider political landscape.