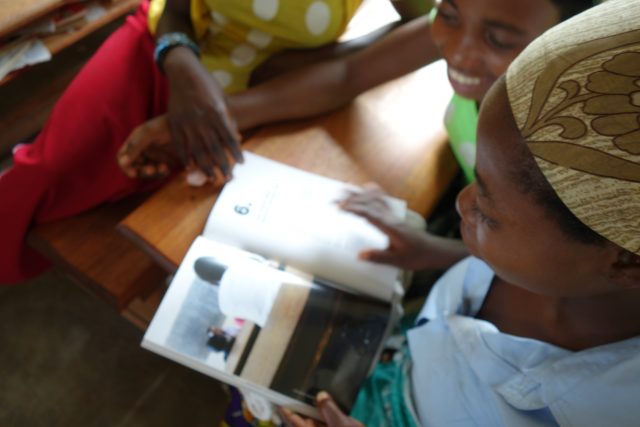 What happens when child soldiers return home? Bill Snaddon writes about the fraught experiences of female child soldiers re-joining their families and communities in eastern DRC, as exposed in the latest research from Child Soldiers International.

What is worse than being abducted by armed militias, raped and ordered to kill? For many young girls in the Democratic Republic of Congo, it’s returning home. This is the shocking revelation made by recent research into the underreported story of girl child soldiers in the central African country.

Anourite (not her real name) was at school when she was abducted by armed militias. She was only eight years old. The Lord’s Resistance Army (LRA), a ruthless rebel group led by Joseph Kony and operating across east and central Africa, held her captive for four years. Her job was to carry bags and babies. This was her value to the LRA, she says, “like all girls too small to serve men”.

While many young girls are forcibly recruited, amidst extreme poverty other girls will join a militia believing it will pay for school fees. Very quickly, though, they realise they weren’t aware of what they were getting into.

Kony is wanted by the International Criminal Court for crimes against humanity, and his LRA is accused of committing grave human rights violations.

Anourite was one of 150 girls aged between 12 and 20 who spoke with Child Soldiers International, an advocacy group, after they’d found a way to make it home. The aim of the research was to explore whether the demobilisation and reintegration programmes, run by charities and government agencies in eastern DRC, are working.

In short, they’re not.

The “vast majority” of programmes to help girls re-settle have failed, says Sandra Olsson, who led the research project for Child Soldiers International.

Many of the reintegration projects aim to support girls in starting a small business when they return home. But even if a girl secures such support, she will struggle to sell her products if she’s not accepted by her community.

Given this, many girls are forced into prostitution to survive. Others conclude that there are few opportunities for them at home so they return to an armed group.

Coming home can also be an emotionally fraught experience, with inadequate provisions made to many of the girls who are dealing with post-traumatic stress. Researchers at Child Soldiers International found that when girls return home, they’re changed personalities – unsurprisingly so, having been sexually exploited and abused and forced into all manner of harmful and violent acts. As a consequence, they often misbehave and become disagreeable. Their community then perceives them as “bad girls”, while not realising the underlying reasons for their altered behaviour. Yet, the girls are often “hurting and angry that perhaps the community didn’t protect them in the first place”, says Olsson, who recently presented the research at Chatham House, a London think-tank.

Most cruel of all, perhaps, is that some families now view their girls as “sexually active”, even though they were raped and abused. This, tragically, can lead to the girls being of less value to the family.

All this serves to further alienate the girls, limiting economic and education opportunities. What emerges is a vicious cycle.

The limits of good intentions

Coupled with the stigma attached to those who return from the battle fields, poor “market research” has hampered reintegration efforts, says Olsson. For instance, one community might end up with a “glut of seamstresses”, when only one or two is needed.

Participation in the training and reintegration schemes is also contentious. Child Soldiers International found that a lot of girls bypass reintegration programmes because they don’t want people to know they were once part of a militia.

From 2009 to 2015, the United Nation’s DRC mission registered 8,546 children (boys and girls) who had been in an armed group. Only 600 of those registered, or 7 per cent, were girls. However, the UN estimates that girls might make up between 30 and 40 percent of the children associated with armed groups.

“These figures suggest that demobilisation efforts in the DRC fail to reach most girls,” say Child Soldiers International. And, for the reasons just covered, even when a demobilisation programme does reach her, it’s likely to fail.

But not everyone sees failure. The DRC Ambassador to the UK, Marie Ndjeka Opombo, says the presidential special advisor on sexual abuse has delivered some “positive, positive results”. The ambassador was short on the details of these results, but she did seem to question the accuracy of the research by Child Soldiers International.

Opombo was at the Chatham House event when the report was released and spoke from the audience after the presentation. She expressed “concern” about the figures published in the report.

However, Michael Tshibangu, president of the association for development and democracy in DRC, an advocacy group, takes issues with Opombo’s analysis.

“I disagree with the assessment of the Ambassador. There have not been positive results,” says Tshibangu, based in London because he says it’s not safe for him to return home to the DRC.

“The current political crisis has overshadowed the issues of sexual violence and recruitment of children. The issues are still there however it’s underreported.”

This raises the question of whether the problems facing child girl soldiers – and the overall concern of child soldiers – can be solved without peace in the DRC?

“Perhaps not solved, but the two – peace and ending child recruitment – are intertwined and need to be pursued simultaneously,” says Olsson.

Tshibangu, who works closely with the DRC opposition and civil society, says “many problems can be solved with good [political] leadership”. He urges the government to organise free and fair elections this year, noting that President Joseph Kabila has been “in power for 17 years and has not been able to form a professional army that can secure the country and protect the population”.

In the meanwhile, what can be done to make life better for girls who return home?

Olsson says immediate solutions are relatively simple, and often proven. A priest or respected elder who publicly endorses the worth of the girls – by getting them to collect psalm books after church, for instance, or inviting them to sing – can cause lasting positive change. A small act, but one that demonstrates to the community that the girls aren’t deserving of discrimination. It signals to others that the girls deserve humane treatment.

Some girls have tried to address this issue themselves, knowing in their very being that an injustice is being committed against them. One girl, aged 16, decided to confront her family after she’d made it home and found herself rejected by them. She courageously called a meeting and told her relatives that none of this was her fault. The research suggests that such scenarios are rare, but in this case the family began to treat her better after she directly explained to them the consequences of their neglect.

Children can bounce back if they’re given the right support, but without community acceptance all other efforts are likely to fail.

Bill Snaddon is a freelance journalist and videographer based in London. He’s been covering African stories since 2009.