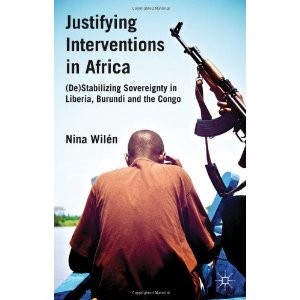 In this post,  Nina Wilén tells us about her new book ‘Justifying Interventions in Africa: (de)stabilizing sovereignty in Liberia, Burundi, and the Congo. Nina is a Post-doctoral Research Fellow with the Fund for Scientific Research (FNRS) in Belgium.

Almost two decades into the new millennium it is clear that ‘benign’ interventions with the aim to stabilize conflict-ridden or troubled states are here to stay. The UN, as the world’s largest international organisation, stands for most of these interventions with over 100,000 peacekeepers deployed worldwide. Yet regional organisations, alliances and different types of ad-hoc coalitions have sailed up along-side UN as new types of actors with the aim to enforce international order and stabilize troubled areas, mostly in Africa. At times these interventions have stretched (un)written rules and norms. The UN’s authorisation of an ad-hoc coalition’s intervention in Libya for example, was seen as breaking new ground (and even breaking formal norms) as the situation in Libya marked the first time the Security Council authorized the use of force for human protection purposes against the wishes of a functioning state, thus straying from the UN’s sacred norm of consent. In December 2015, as the crisis in Burundi developed, the African Union’s Peace and Security Council also threatened to intervene against the wishes of the Burundian government to protect civilians and re-establish security. These examples show that there is an increasing tendency to blur the line between internal and international affairs and simultaneously to re-interpret the notion of sovereignty in the quest to stabilize conflict-ridden states. This begs the question of how to stabilize a state through external intervention without destabilizing its sovereignty, because ultimately, the aim of these interventions are rarely to create new states or divide existing ones. The aim is to stabilize states through interventions while maintaining the notion of sovereignty as an organizational measure intact.

In my book, Justifying Interventions in Africa: (De) Stabilizing Sovereignty in Liberia, Burundi and the Congo, I explore the relationship between sovereignty, stability and intervention by examining justifications for interventions in three states. I argue that sovereignty should be understood as a social construct. As such its political meaning can shift when international actors, states or leaders attempt to interpret the concept at a specific point in time and justify their own actions. These justifications are directed to an audience – what could be called an interpretive community. We can learn a great deal about the politics and possibilities for intervention by exploring the exchange between these varied actors and the ways in which verdicts on legality, legitimacy and sovereignty are forged.

In Liberia for example, ECOWAS intervention in 1990 was preceded by several different justifications, directly addressing the UN as an interpretive community. The justifications both played on humanitarian reasons and international order: ‘ECOMOG is going to Liberia first and foremost to stop the senseless killing of innocent civilian nationals and foreigners and to help the Liberian people to restore their democratic institutions’ (UNSC S/21485, 10 August 1990). And (ECOWAS) has taken the decision to ‘assume their responsibility of ensuring that peace and stability is maintained within the sub-region and in the African Continent as a whole’ (ECOWAS, Decision A/DEC.1/8/90,1990).

ECOWAS obviously left out the fact that they entered the conflict, not assuming the role as neutral peacekeepers, but moreover as supporters of the Doe government, actively fighting Charles Taylor’s rebellion, which ultimately prolonged instability rather than ending it. The UN took time to issue any official statement on ECOWAS intervention and on the conflict in general. Not until a year after the conflict started, in January 1991, did the president of the UN Security Council make a statement commending the efforts made by ECOWAS to promote peace and normalcy in Liberia (UN, S/22133, 22 January 1991). This statement and the following ones from the Security Council that supported ECOWAS, were later interpreted as a retrospective authorization of the intervention in spite of ECOWAS’ dubious role as a stabilizing force and in spite of the lack of a legal basis for the intervention. Later accounts of ECOWAS intervention have portrayed it as a precedent for rapid regional responses to conflicts and, following this, ECOWAS organisational structure and mandate has expanded to include peace and security issues, which a number of new interventions in the region showcase.

Justifications for interventions and how they are received, interpreted and acted upon are therefore important to critically examine in order to understand how international actors fix the understanding of sovereignty at a precise moment in time. This ‘fixing’ can have longstanding consequences for the actual intervention, as it at least temporarily ‘re-writes’ the state and thereby also creates the space within which external actor can act. A destabilization of sovereignty may occur when external actors make claims or declarations in the name of a target state’s people, or when a state no longer has recognition by external and internal actors that it has the exclusive authority to intervene coercively in activities with its territory. In Burundi, Liberia and the Congo, sovereignty was, at least momentarily, destabilized according to this definition, in relation to foreign interventions. To identify, explore and understand how justifications for interventions (de)stabilize sovereignty is not, however, only important at the time of intervention. It is also key to understanding how externally driven peace-building efforts unfold and develop in the target states and how these, together with justifications for interventions, may re-write the state.

Zambia’s Crisis of Democracy and the 2021 General Elections