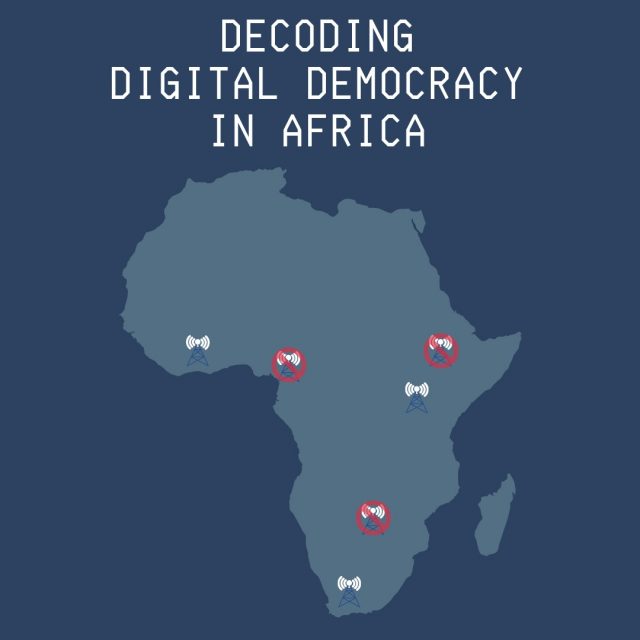 Internet shutdowns in Africa have become the new normal. In 2019, at least 10 African countries blocked access to the internet, constituting a growing trend of digital repression, especially in less democratic regimes. The term internet shutdown has been widely used to describe different phenomena of internet manipulation, ranging from throttling of internet speed, over blocking of specific web content such as Facebook or Twitter, to banning internet access altogether.

These shutdowns usually occur during times of political contestation, such as violent protest or elections. In spring 2019, for instance, the Sudanese government blocked access to mobile internet altogether amid increasing anti-government protests in Khartoum. Similarly, in Zimbabwe in January 2019, the government blocked internet access in response to increasing protest against rising fuel prices in the country. Shutdowns appear to have become the new normal and governments that refrain from using them are applauded when they announce to stay connected.

This trend is accompanied by growing media and civil society attention pointing to potential consequences of internet shutdowns for the economy, authoritarianism, or individual lives, amongst others. Yet we still know far too little about the actual societal and political impacts of internet shutdowns.

For social scientists the challenge already begins with measuring internet disruptions. Anecdotal evidence from media reports or self-reported information might suffer from biases and usually lacks more detailed information on the geographic scope, companies involved, and techniques used to block internet access. This does not only impede scholarly attempts to study internet shutdowns across countries and over time, but also blurs the involvement of different actors and eventually makes it more difficult to hold them accountable.

Computer scientists have started to analyse large-scale internet traffic in order to develop unbiased measures of internet disruptions. The platform IODA provides fine-grained information about internet shutdowns including information about different providers involved as well as timing. However, the available datasets are usually large, as measurements are run multiple times per day, and are thus difficult to process, aggregate, and interpret without IT expertise.

Software by the Open Observatory of Network Interference (OONI) provides data crowdsourced by individuals who run the OONI app on their smart phone. OONI data provide in-depth information about which services are blocked by which providers. This doesn’t sole the problem, however, because OONI relies on self-reporting and so data is still scarce for some countries, especially in Africa.

When do governments stay connected?

Despite the increasing trend among many African rulers to shut down the internet, some governments refrain from blocking access. For example, only one third of all African national elections were accompanied by (partial) blocking of internet access. Several reasons might keep incumbents from blocking internet access.

Second, there is increasing international pressure by civil society and human rights organizations. Campaigns like #KeepItOn or Article19 publicly shame governments and raise awareness for the consequences of internet shutdowns and their violations of freedom to expression.

Third, not all governments may have the capacity to easily implement a shutdown. In order to restrict access to the internet, governments rely on internet service providers (ISP) for technical implementation of the shutdown. In some African countries like Ethiopia or Eritrea the government controls 100 percent of the internet’s infrastructure and runs the only state-owned provider giving them direct access to ISP operations. In other countries, like Nigeria, South Africa, or Uganda, the ISP landscape is more diverse with many providers owned by private and foreign shareholders eventually making it more complex to implement a shutdown across ISPs.

The (un)intended impact of internet shutdowns

Despite limited availability of data suited for statistical analyses across regions and over time, several attempts have been made to better understand the actual consequences of internet shutdowns.

A common justification put forward by governments is that internet shutdowns are a necessary tool to prevent violent protest and preserve national security. A study by Navid Hassanpour examining protest behaviour during the 2011 shutdown in Egypt, suggests quite the opposite, however. Once the Egyptian authorities cut access to the internet, the dispersion of protests in Cairo increased. A lack of communication likely promotes local mobilization as citizens need to go outside and meet in order to physically to receive information about and political developments. Jan Rydzak, Moses Karanja and Nicholas Opiyo’s work on internet shutdowns across several African countries also supports that street protests increase in immediate response to shutdowns.

Work by Anita Gohdes focusing on Syria suggests that governments even use internet shutdowns strategically to weaken the opposition. In the context of the Syrian conflict, the number of killings increased significantly in opposition strongholds affected by internet shutdowns.

These studies are useful to better understand actual impact of internet shutdowns on protest and civil conflict. It is less clear, however, what role internet shutdowns play in the context of elections. In Africa, one third of all national elections between 2015 and 2018 were accompanied by an internet shutdown. Levels of voting irregularities and electoral violence, as measured by the Varieties of Democracy project, were significantly higher during elections in which an internet shutdown occurred. However, whether and how these shutdowns actually affect the conduct of the elections remains largely unknown.

Given the increasing number of internet shutdowns in Africa, there is a need to better understand how these temporary disruptions impact political and social life. This is important not only to critically challenge justifications brought forward by governments, but also to hold responsible actors accountable.

Lisa Garbe (@LaserGabi) is a doctoral researcher at the University of St.Gallen and currently a visiting researcher the Hertie School of Governance in Berlin.

PODCAST: Fromagehomme on #DigitalDemocracy in Africa