Hakainde Hichilema was sworn in as Zambia’s seventh president on 24 August 2021, after winning a landslide victory in an election held two weeks earlier. Hichilema’s party – the United Party for National Development (UPND) – also secured a majority in the National Assembly after defeating Edgar Lungu’s Patriotic Front (PF). After ten years of PF rule, Zambia’s economic and democratic credentials had been significantly eroded. Amid the Covid-19 crisis, the PF government had defaulted on a Eurobond payment after accumulating unsustainable debt. Corruption was on the rise, and democratic space had closed. Hichilema’s victory was, therefore, welcomed by many Zambians as a ‘New Dawn’: an opportunity for economic recovery and to restore democratic ideals.

One of the first decisions Hichilema made as president was to appoint an experienced international economist, Dr Situmbeko Musokotwane, as finance minister. Dr Musokotwane demonstrated that his priority was to negotiate an economic programme with the World Bank and the International Monetary Fund (IMF) to restore the nation’s credibility and to renegotiate with lenders. On his first international trip, Hichilema travelled to the United States of America for the 76th United Nations General Assembly where he also met US Vice President, Kamala Harris, and heads of the World Bank and IMF. Before his election, Hichilema was viewed as a market-friendly leader who was more supportive than his predecessor of fiscal prudence and an IMF programme. On 6 December, the IMF and Zambia reached a staff-level agreement for $1.4 billion, meant to support the restoration of macroeconomic stability. Nonetheless, the economic restructuring expected with an IMF programme will very likely entail that the UPND implements some unpopular austerity measures such as the removal of electricity and fuel subsidies. While such austerity measures are inevitable to restore stability, the short-term impacts may disappoint Hichilema’s supporters who expect immediate improvements in their standard of living.

Hichilema promised a range of sweeping reforms in his inauguration speech, including promises to grow the economy and create jobs. These promises were consistent with Hichilema’s campaign pledges and Zambians expect immediate action from the man who promised to fix the economy. In October, Dr Musokotwane presented the 2022 national budget which was much more expansionary than critics expected. The budget included allocations to recruit 30,000 teachers and 11,200 health personnel, with promises of further recruitments in subsequent years. Further allocations were made to pay outstanding pension arrears for public sector workers and to expand the coverage and benefits for social assistance grants. Rural development was another major focus, with the UPND government increasing the allocation of constituency development funds sixteen-fold, as a means of taking resources closer to the ‘people’. The move towards decentralising the budget was a historic and important break from the past. Yet some of the institutional reforms needed to effectively implement the decision are still unclear.

The budget also included plans to abolish fees charged at public primary and secondary schools in line with a UPND policy of free education. Overall, the budget was more social-democratic than liberal and demonstrates that the UPND would want to avoid some of the socio-economic consequences associated with austerity in the 1990s.

An obvious implication of Hichilema’s election as president was a reconfiguration of the country’s political settlement. Analysing the ministerial appointments to the cabinet is a good starting point for understanding power distribution within a state, and Hichilema’s cabinet announcement received mixed responses. In terms of regional representation, it is a great improvement on the previous PF cabinet. For example, Lungu appointed Permanent Secretaries from only two regions: the Northern region (comprising Northern, Muchinga and Luapula Provinces) and the Eastern region. While this was claimed to be a ‘coincidence’, these regions represented the majority of the PF’s vote share in the 2016 elections. In the ‘New Dawn’ cabinet, each Province has at least two representatives within the administration, which also serves to improve the representation of ethnic language groups. This seems to mark a return to the approach of ethnic balancing, which has been an important feature of Zambia’s political landscape since independence. 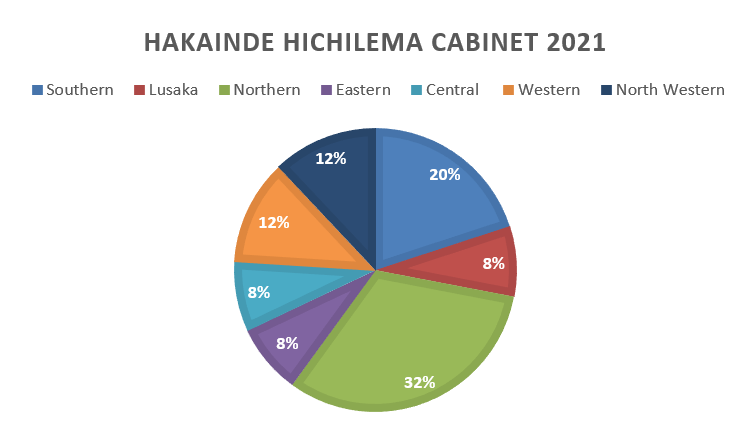 Source: Mutuna, S.K. and Beardsworth, N. (2021). Ethnic balancing before and after the elections, presentation at the Zambia Elections Research Network workshop, 28-29 October 2021.

As a country with many ethnic language groups, inclusive elite bargaining has been a vital strategy for Zambia’s ruling coalitions to maintain order and retain power. Such bargains accommodate contending social groups – in this case, ethnic groups – through access to state resources and power. This is often achieved through patronage, in particular political appointments that are under the control of the Presidency. While previous governments have allocated key positions within the executive, administration, military and parastatal sector in a balanced way, it was notable that under PF these positions were predominantly held by Bemba speakers. While Hichilema has tried to restore the ethnic balance, it has been observed that some of his important appointments such as heads of security services have favoured individuals from regions that have historically voted for him. Hichilema has brought back some veterans who also served under the Movement for Multiparty Democracy and Patriotic Front governments suggesting a strategy of rewarding loyalty and building support bases for the future.

On the other hand, the gender balance has worsened. Only four out of the 25 newly appointed cabinet ministers are women, and while female representation is better among the PS appointments it still falls far below 50%. Defending his decisions during a recent Chatham House event, Hichilema claimed that this is circumstantial due to the lower number of women being elected to Parliament in August 2021. However, it is also accompanied by the dissolution of the Ministry of Gender, with the functions being moved to the Office of the President. This raises questions about Hichilema’s commitment to gender equality, despite the manifesto claim that UPND will “strive to achieve equality of representation for gender in all positions of government”.

Further criticisms were directed at Hichilema in his first 100 days. In opposition, the UPND opposed the appointment of PF loyalists to senior government positions. Rather than reversing this trend, Hichilema replaced some Permanent Secretaries with UPND loyalists who had no previous experience in government. He also retained many civil servants from the old regime, much to the disappointment of some supporters who favoured the removal of all civil servants loyal to the previous regime. After more than two decades in opposition, UPND members have come to expect that they should be rewarded for their loyalty to the party with public sector jobs.

Hichilema has taken a cautious approach to addressing the corruption of the last regime. The ‘New dawn’ administration offered amnesty to officials who held public office if they voluntarily returned what they had stolen. This resulted in at least one major recovery of cash. Further, the state recently made some arrests involving senior government officials who served in the last administration.

Perhaps the most notable aspect of Hichilema’s first 100 days is that he has made efforts to restore press freedoms and curb violence. He made clear that party youths who wanted to control markets and bus stations illegally would not be allowed to do so despite expectation from some within UPND that they would benefit – at least to some degree – from a practice that thrived when PF was in power.

The Minister of Justice also recently announced that the government would institute constitutional reforms before the next elections. Constitutional reforms in Zambia have historically been manipulated to safeguard the interests of governing parties and the new administration will have to demonstrate that it is willing to depart from this practice. The appointments of a well-respected Chief Justice and other judicial service officeholders in November were welcomed as significant moves for the prospect of much needed judicial reforms.

It remains to be seen what impact Hichilema’s presidency will have over the next five years. On an economic front, he will have to juggle the massive demands of voters who expect jobs, free education, and a better economy, with austerity measures and repaying Eurobonds and other loans. This will be a daunting task and his success or failure in this regard will be crucial for whether he faces strong opposition or not in 2026. The first 100 days of Hichilema’s presidency show that the ‘New dawn’ has brought both continuity and change: the practice of rewarding party loyalists with civil service appointments looks set to continue. However, the new cabinet represents a shift from exclusionary bargaining under PF to a more inclusive approach, being more ethnically and regionally diverse, and yet there remains a need for the inclusion of other salient groups under UPND, particularly women and youth. The decision to decentralise the disbursement of budget resources away from the capital, Lusaka, to constituencies, is historical and could lead to improved development outcomes – if accompanied by the necessary institutional reforms – especially in rural areas that have historically been marginalized.

While it is too early to draw firm conclusions about what these dynamics will mean for Zambia’s political settlement in the future, there is a palpable sense that the drift towards authoritarianism and narrowing of the democratic space under the PF is already reversing. In particular, the sense of freedom and optimism within the media and civil society sectors suggests an initially positive direction of travel under Zambia’s ‘New Dawn’ government.

Hangala Siachiwena is a Postdoctoral Researcher at the University of Cape Town.

Kate Pruce is an ESRC Research Fellow at the Global Development Institute.

Marja Hinfelaar is the Director of Research and Programs at the Southern African Institute for Policy and Research, SAIPAR.

This blog appeared first with the Global Development Institute. To read it – and many other excellent pieces – there, click here.