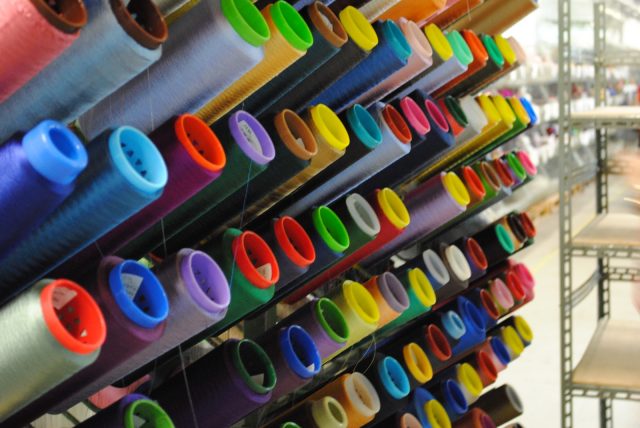 In this blog, Alessandra Mezzadri argues that whilst there has been an increased amount of attention on ‘modern slavery’ and forced labour in the garment industry, there are broader forms of unfreedom that ensnare the workers who stitch our clothing. Alessandra is a lecturer in Development at the SOAS.

Growing attention is focused on ‘modern slavery’ and forced labour in the garment industry, but broader forms of unfreedom ensnare the workers stitching our clothes.

The textile and garment industries have always been at the centre of the dark history of capitalism. The early origins of our clothes interweave with those of Britain’s ‘satanic mills’, colonial trade, and black slavery, as illustrated by Sven Beckert in Empire of Cotton. The garment industry has hardly managed to get rid of this dark baggage, and its ‘modernisation’ has manufactured new forms of oppression.

Recent media coverage has focused on the collapse of Rana Plaza in Savar, Bangladesh, that killed more than 1,100 garment workers in April 2013. Horrendous spectacles such as these attract global attention, however far more numerous are the smaller-scale instances of repression endured by garment workers worldwide. Last year, workers fighting for an increase in minimum wages were shot in the street of Phnom Pehn, Cambodia. In India, several garment units working for UK retailers were accused of employing migrant child labour and refugees. Others deployed the infamous Sumangali scheme, a recruitment practice bonding workers to employers in exchange for a final payment (made of withheld wages) that rarely materialises.

The unveiling of cases of ‘bonded’ and forced labour in the industry has contributed to a revival of the debate on ‘new’ or ‘modern’ slavery. As pointed out by Naila Kabeer, there are many problems with describing garment work as slavery. For instance, it risks emptying the term ‘slavery’ of those traits not simply linked to labouring, but to a far more complex system of white domination and commodification of the body. Moreover, this focus on ‘outside-the-system’ extremes has obscured the broader, more endemic forms of labour exploitation that are central to the industry.

The global garment industry reproduces multiple forms of ‘unfreedom’ far surpassing narrower definitions of forced or bonded labour. That said, the ‘freedoms’ available to many garment workers today are often equally undesirable. The underlying cause of this false dichotomy is the rise of neoliberal globalisation.

Jairus Banaji observes that when it comes to labour under capitalism, ‘freedom’ is not the happy term found in the liberal dictionary. As argued by Karl Marx, it simply means that workers are ‘free’ from their means of production and subsistence outside the market. In short, they are dispossessed and can ‘choose’ to either labour or starve. It was this freedom that was available to landless mill workers in 17th century Britain and to migrant garment workers in 19th century United States. However, in today’s global garment sweatshops the ‘freedom’ of workers to starve can be guaranteed even without full dispossession.

In garment exporting countries, the rise and expansion of an industrial proletariat coincided with the rise of neoliberalism. The neoliberal recipe ofstructural adjustment accelerated processes of dispossession, making it hard for anyone to survive outside the imperatives of the market. With the rise of neoliberalism, the World Bank also imposed export-oriented industrialisation strategies as ‘The Way’ to develop, triggering sustained processes of outsourcing. This policy ‘combo’ ensured the availability of a cheap labour force that, even when not fully divorced from the land, became a reserve army of labour for the new global garment factories. In fact, field studies on garment workers worldwide indicate that sweatshop workers may still have ties to theland or with their rural origins. Their families often engage in multilocal, diversified livelihoods, combining sources of income from factory, informal work and seasonal agriculture. Studies also show the heterogeneity of garment workers. This depends upon the different tasks workers perform, but also on ‘degrees’ of dispossession and ‘unfreedom’.

Assembly line workers in Export Processing Zones or large Industrial Estates like Rana Plaza co-exist with armies of home-based workers, who may still own their looms or old stitching machines. Albeit ‘unfree’ of their possessions, they are all ‘free’ to stitch or starve. Notably, this lack of full dispossession—this ‘unfreedom’—may be here to stay. Such partial unfreedom is useful for both western brands and local suppliers, as full dispossession would likely require employers and states to internalise the costs of social reproduction of the labourforce. When workers fully depend on selling their labour, only the wage or welfare provisions allow them to survive. However, a higher wage would decrease competitiveness and undermine the cheap fashion model. And welfare provisions are low in many garment-exporting countries. In fact, as the recent financial crisis showed, worldwide the neoliberal state is not really big on reproduction.

Garment workers’ freedom to stitch or starve intersects what Jan Breman calls ‘freedom from a dignified existence’. This does not only mean lack of ‘decent’ working conditions. Many industrial colonies—be they informal hamlets or Panopticon-like industrial dormitories—only (poorly) cater to individual survival needs while forcing workers to separate from their families. One could define this as ‘freedom’ from social reproduction (or, more simply, from living) outside labour. A greatly alienating experience, the result is that workers are effectively ‘unfree’ to reproduce as anything but individual workers.

Notably, the lack of workers’ full dispossession may hardly be transitory, if neither wages nor social welfare provisions increase significantly. However, the sweatshop experience may well be. The working and living rhythms of the sweatshop can hardly be sustained for long and workers often make garments for a limited time before being replaced by new, younger workers. A report by War on Want on Bangladesh indicates that 86 percent of workers are between 18 and 32 years of age. Also in India, the majority of garment workers stop working at around 30. This challenges narratives over-celebrating industrial work as a liberating experience that—while harsh—will pay off in the future.Fast fashion produces a proletariat that may enter and exit the assembly line as quickly as its tops and skirts.

Finally, the ‘freedoms’ and ‘unfreedoms’ available to garment workers also depend on their different social profiles. As argued by Silvia Federici, the human body was ‘the first machine developed by capitalism’. Men, women or children experience the oppressive rhythms and conditions of the sweatshop in different ways. For instance, inside sweatshops, women workers are controlled via patriarchal norms. Claiming to ‘protect’ them, male managers often lock them into industrial premises. All industrial disasters in the history of the garment industry, from the Shirtwaist case in New York to the Tazreen andRana Plaza cases in Bangladesh, were made even more lethal by these practices. Neoliberal globalisation did not manufacture these forms of social oppression, but by placing a premium on labour flexibility and comparative advantage it reproduces them when useful to gain competitiveness.

The term ‘modern slavery’ conceals analytical and political tensions when applied to garment work. Media sensationalism aside, its use should be based on the debate regarding the potential evolution of slavery across modes of production, phases of capitalist development, and regimes of wage work. That said, we must acknowledge that the only substantial freedom of garment workers today—that of stitching our clothes—is structured around multiple forms of unfreedom. These far exceed isolated cases of forced labour and stretch across multiple productive and reproductive realms. Thus, perhaps to ensure ‘better clothes’ we should begin by developing better categories of analysis.

Why Somalia’s worst ever famine shames the world