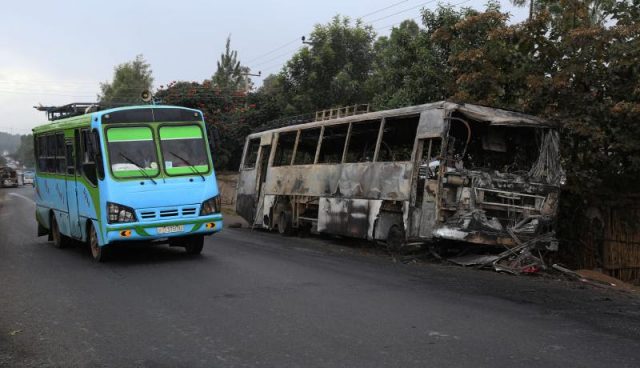 Jason Mosley provides insight into recent unrest in Ethiopia, where the Ethiopian People’s Revolutionary Democratic Front are at a crucial turning point. Jason is a Research Associate of the African Studies Centre, University of Oxford. He is also the Managing Editor of the Journal of Eastern African Studies and an Associate Fellow of the Africa Programme at Chatham House.

Ethiopia’s prime minister Hailemariam Desalegn declared a six-month state of emergency on 8 October, as well as hinting at electoral reform and potential engagement with the political opposition. Demonstrations have been ongoing for nearly a year. Until July, these were significant but sporadic, and largely concentrated in towns across the country’s Oromiyya Regional State. Subsequent tensions around Gondar triggered a wave of protests across towns in the Amhara Region. Intensification of protests in both regions has followed. On 2 October, security forces intervened at a large Oromo religious festival in Bishoftu to disrupt demonstrators, triggering a stampede which reportedly killed as many as 200 people. In the past few weeks, there have been increasing attacks on businesses – largely those associated with the government’s economic development agenda, including large-scale agribusiness, factories (including textiles) and cement plants, concentrated in the industrial corridor between Addis Ababa and its transportation hub and Hawassa to the south.

The state of emergency indicates that the government of the Ethiopian People’s Revolutionary Democratic Front (EPRDF) coalition, which with its affiliated parties controls every seat in the country’s parliament, recognizes that it is has been unable to impose order. The decree provides legal cover for a more aggressive security posture, which would fit with the pattern of forcefully containing opposition, established since post-election violence in 2005. However, the premier’s hints at electoral reform also indicate that the EPRDF might be seeking alternative approaches. After 25 years in power, the EPRDF finds itself at an important turning point.

In understanding the current situation in Ethiopia it is important to note that the protests erupted from the grassroots, not from a political movement (either political or armed opposition) mobilizing its base. A confluence of three dynamics underpins the unrest:

These dynamics erupted into protests in April 2014, triggered by fears that Addis Ababa would annex parts of Oromiyya Region to facilitate the city’s expansion and continued industrialization. These fears were intensified by decades of resentment over land control in Oromiyya, with roots in the 19th century conquest of southern regions of Ethiopia. After protests broke out again in late 2015, the OPDO formally abandoned the plan. However, this failed to mollify the protesters, as have subsequent efforts to purge the OPDO leadership and to tackle corruption. The spread of protests to Amhara Region, the attacks on businesses, and the huge death toll in Bishoftu represent significant watersheds in the history of opposition to the EPRDF. In scale and significance, the demonstrations are likely rivalled only by the widespread popular and student demonstrations that preceded the military coup against the Imperial government in 1974.

However, the EPRDF – and the TPLF in particular – came to power with a vision of itself as a vanguard party. The EPRDF has viewed its role as to lead a population unready for modernity – economic or political – into development. The vast majority of the population relies on agriculture, mainly subsistence, for their livelihoods, and in the 1990s, education was limited. Ahead of the 2015 elections, it appeared that the EPRDF still held the same view of its role vis-à-vis the broader public. Training was held for civil servants and other public sector employees to set out the EPRDF development vision (with a 20-30 year timeframe), and stress that only the EPRDF could deliver.

The demonstrations indicate that the population – especially the youth, which has benefitted from the expansion in education – no longer accepts the EPRDF’s vanguard role. Moreover, demonstrations have largely called for the government to respect the rule of law and the country’s constitution rather than calling for the overthrow of the system. It is possible that after 25 years of power, EPRDF elites will have to reconsider their role and their understanding of the population, and their relationship to the body politic. Built up resentment of ethnic privilege and corruption (perceived or real) will be difficult to overcome, but perhaps some of the ingredients are present for compromise. The coming months will reveal whether there is a future for the EPRDF government beyond the vanguard, potentially opening the road for more genuinely participatory governance.

This blog originally appeared on the Chatham House Blog.

Peace, or continued war in Ethiopia?