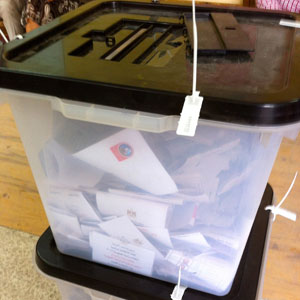 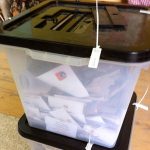 Next week, Egyptians will vote to elect their president. Clément Steuer, political scientist at the French documentation and research center (Cedej) in Cairo, and working with a funding of the Région Rhône-Alpes, discusses the results of the first round and presents the positions of the two candidates competing for the run-off.

The second round of Egypt’s Presidential elections, scheduled for June 16 – 17, will bring Muhammad Morsi, leader of the Muslim Brotherhood, and Ahmad Shafiq,former member of the National Democratic Party (NDP) head-to-head. That means that voters will have to choose between an Islamist and a representative of the old regime. Of all the possible combinations for the final run-off, this was the most polarized.

In the last round, Muhammad Morsi took first place with 25% of the votes. Anengineer who has taught at universities in the US and Egypt, Morsi grew up in theNile Delta region, which is a stronghold of the Muslim Brotherhood. He currentlyserves as chairman of the Freedom and Justice Party (FJP), which won thelegislative elections this winter by gaining 40% of the votes and 45% of the seatsin the People Assembly and the Council Assembly.
Morsi is the Muslim Brothers’ second choice for leadership. A famously dull orator,he has long been an important player behind the scenes for the Muslim Brotherhood but was not a prominent public figure. He rose to the position ofcandidate after the powerful businessman Khairat Al-Shatir was forbidden to run bya High Electoral Council decision. Consequently, he has been labeled a ‘spare tyre’ and some have even waved tyres at his rallies to drive the message home.

In fact, until March this year, the Brotherhood insisted that they would avoid fielding a candidate for the presidential elections altogether. Instead, they argued, they would concentrate on gaining parliamentary seats to control the twoassemblies and writing a Constitution insuring a parliamentary regime. But theirplans were scuppered when liberal forces and military powers agreed to block theIslamist grip over the Constituent assembly. Facing this block, the Brotherhooddecided to enter the fray in an attempt to control both presidential andparliamentary power.

Morsi’s rival, Ahmad Shafiq won a close second place in the last round with 24%of the votes. Shafiq was the minister of Civil Aviation for a decade and becamePrime Minister during the revolution itself. It was on his watch that the infamous ‘Camel Battle’ occurred, in which demonstrators were attacked by armed thugs on camels and horses in Tahrir Square. Several demonstrators died in the attacks. One month later, Shafiq was dismissed from his post after being heavily criticized on national television by Alaa Al Aswany, a famous Egyptian novelist.

Like Morsi, Shafiq was not a first-choice presidential candidate: he gained the backing of the military and remnants of the old regime after former vice-presidentOmar Suleiman withdrew from the presidential race in April. Although Shafiq has no political party supporting him, he gained a grassroots following through ex-NDP networks and the support of Coptic church leaders, who are afraid that Islamistforces might control all the political institutions.

The results of the presidential round are very different from the parliamentaryround. The Muslim Brotherhood’s share of the vote retreated from 40% to 25%.Similarly, liberal parties slipped from 20% to 11%. On the other side, old regimeremnants progressed from 5% to 24%, and revolutionary forces from 3% to 39%.Indeed, the two elections were very different, and the role of the political partieswas far less important during the presidential race, where candidates tended towork with their own teams. Consequently, if presidential campaign was morepolitical than legislative one (with voters supporting a man who embodied anational project not a well-known figures promising regional advantages), it wasless politicized by political parties setting agendas and mobilizing the electorate.

Although figures associated with the revolution are not represented in the final run-off, they did perform well in the election. Hamdeen Sabahi, for example, came thirdin the first round with 21% as the favourite candidate of the left and youngrevolutionary activists. Sabahi is a nasserist candidate, a student activist leaderduring the 1970s’, and served as an MP between 2000-2010. In 1995, he foundedthe Karama (dignity) Party, which failed to obtain a legal license until 2011. Duringthe parliamentary race, this party formed part of the democratic coalitiondominated by the Muslim Brothers’ FJP.

Similarly, Abd Al-Moneim Aboul-Fotouh, who came in fourth with 18% was also astudent leader under Sadat. Trained as a doctor, Aboul Fotouh has served as headof the Egypt Doctor’s Union and now serves as Secretary General of the ArabMedical Union. He was a member of the Guidance Bureau of the MuslimBrotherhood, but was ousted in 2009. He had, by that point, become one of the most liberal figures in the bureau, whose own opinions often conflicted with the Brotherhood’s official line. After the revolution, he was excluded from theBrotherhood because of his desire to be part of the presidential race. Despite this, he continues to attract support from many younger members of the Brotherhood, who see him as combining both religion and democratic reform. Aboul Fotouh wassupported by some prominent revolutionary figures (such as the Google executiveWael Ghoneem), by the moderate Islamist Wasat (center) Party, as well as by theSalafist Nur (the Light) Party. The latter, who took the second place in theassembly with more than 20% of the seats, decided to support Abul Futuh afterthe High Electoral Council canceled the candidature of the salafist preacherHazem Salah Abu Ismaeel.

It may be tempting at this point to combine these two candidates and talk of a“revolutionary vote” of around 40%. This aggregation, however, would bemisleading. Abul Futuh is undoubtedly on the side of the revolution, and a big partof his campaign team and of his support were young activists. But he is anislamist candidate as well, and the Nur Party was among his supporters. If aSalafist candidate had run, official results would be totally different. Thecancellation of three important candidates by the High Electoral Council alsoplayed a key role in these elections. Consequently, predictions for the upcomingrun-off are likely to be unreliable. Both the remaining candidates frighten significant sections of the electorate, and both are dedicating large parts of their campaigns to playing on the fear their opponents create. Whilst Morsi is trying to presenthimself as an open-minded candidate and depicting his rival as a ‘new Mubarak’,Ahmad Shafiq is busy highlighting the risk posed by an Islamist monopolization ofpower and positioning himself as the candidate of a secular and civil state; the lastobstacle to obscurantism and a religious state.