The plight of African democracy is worsening. Global trends toward democratic backsliding have not spared the continent with incumbent leaders violating constitutional term limits, persecuting opponents, and manipulating elections. There are fewer democracies in Africa now than 20 years ago.

And then there are the coups. On 23 January, only seven years after last returning to their barracks, Burkina Faso’s military once again deposed their elected president. This follows closely on the heels of the “epidemic of coups” witnessed in 2021, including successful military takeovers in Chad, Guinea, Mali, and Sudan. Other attempts failed, including in Niger last March. Just days before the inauguration of newly elected President Mohamed Bazoum, the presidential guard fended off an attack by soldiers from the nearby airbase.

My research suggests that diversifying Africa’s militaries is vital to reversing these trends and furthering democratization. Sequencing also matters. Military diversification before elections has a far better chance of allowing new democratic institutions to survive. Relying on founding presidents to reform the military, on the other hand, often leads to reactionary coups and the return of authoritarianism.

Many African countries have a long history of ethnic stacking—when leaders recruit co-ethnics into security forces, usually armies or paramilitaries, to bolster their loyalty (my book discusses this in some depth). These ethnic armies are normatively incompatible with democratic consolidation in multiethnic societies. The armed forces should reflect the diversity of the nation, without identity-based restrictions on recruitment and promotion. Moreover, in a democracy, power must rotate between leaders and political parties that represent more than a single narrowly defined ethnic community—without the lingering threat of military intervention.

Indeed, African democracies overwhelmingly possess diverse armies. I have recently compiled new data on ethnic stacking practices across Africa, from independence to 2018. I found that only 24% of democratic leaders stacked compared to 50.7% of autocrats (following the Geddes, Wright & Frantz regime type classifications). Using a higher bar for electoral democracies from the Varieties of Democracy project, no democratic leader consistently stacked throughout their time in office. Indeed, rates of ethnic stacking closely track levels of democracy over time (figure reproduced from my article here): 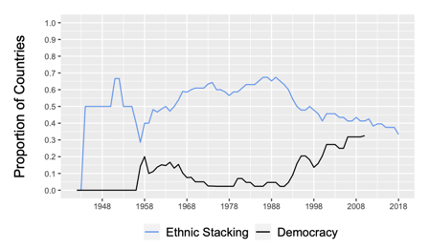 But if this relationship is causal, in which direction does it run? Does ethnic stacking prevent countries from attempting democratization? Does it hinder democratic consolidation? Or do democratized countries systematically diversify their militaries?

Digging deeper into the evidence suggests that while some democratically elected leaders have successfully reformed their militaries—dismantling inherited ethnically stacked armies—usually the process works the other way. Much more often than not, successful democratization is preceded by military professionalization and diversification.

However, those with ethnically stacked militaries were far less likely to meet even a minimal bar for success (50% versus 100%). Which I have measured as surviving on the Geddes, Wright & Frantz list of democracies for at least five years. Their classification, in turn, is based largely on maintaining reasonably fair and competitive elections. Make no mistake, even the success stories are still quite fragile and often flawed democracies.

In other words, democratization efforts with a legacy of diverse armies have double the likelihood of emerging intact from the initial period of liberalization. This supports the idea that ethnic armies have played a significant role in blocking or reversing democratization.

Breaking the data down even further emphasizes the importance of sequencing. Of the 12 countries who had ethnic armies in 1989 and later attempted democratization, six met this “bare bones” definition for success: Kenya, Liberia, Malawi, Nigeria, Sierra Leone, and South Africa.

In three of these cases, the military was actually de-stacked just before the democratically elected leader took power. Civil wars in both Liberia and Sierra Leone devastated their armies. Peace processes then brought international assistance and monitoring that rebuilt their security forces from the ground up—this time recruiting broadly across ethnic groups (see here and here)—while also overseeing democratic elections.

In another two of the success stories, the historic ethnic army was de-stacked very quickly after founding elections. In South Africa, the 1994 transition to majority rule included the racial diversification of the historically white military. However, the actual process of military integration did not begin until a month before President Nelson Mandela took office and was largely conducted during the first few years of his presidency.

The upper ranks of Nigeria’s armed forces had been controlled by northerners, and especially Hausa-Fulani officers, since the outbreak of the Biafran War in 1966. The military annulled the 1993 presidential elections when a southern Yoruba candidate polled ahead of their preferred northern candidate. However, the military allowed elections to go forward in 1999. This time their candidate of choice won. Olusegun Obasanjo was a retired general and, even though he hailed from the Southern Yoruba, the top brass considered him a sympathetic friend and unlikely to instigate reforms. Obasanjo then surprised everyone by immediately retiring 93 high ranking officers, including 26 generals. He filled their positions with soldiers from minority ethnic groups in the Middle Belt region (see here).

The outlier is Kenya. Kenya has held regular multi-party elections since the 1990s with one alternation of power between political parties, in 2002/2003. Yet, Kenya’s military has remained ethnically stacked, although only at the very highest ranks. After his election, President Mwai Kbaki purged the top brass of Kalenjin officers and replaced them with co-ethnic Kikuyu soldiers. The subsequent president—Uhuru Kenyatta who is also Kikuyu—has retained this ethnically-based control over both the Kenya Defense Forces and the National Intelligence Services.

The six failed attempts occurred in Burundi, the Central African Republic, Congo-Brazzaville, Guinea Bissau, Niger, and Sudan. In all of these countries, the military has a long track record of political intervention and remained dominated by the historic ethnic army throughout the democratization period—leading to more instability and coups. For example, Congo-Brazzaville elected its first democratic president, Pascal Lissouba, in 1992. Over the next two years he attempted to reform the Mbochi dominated army that he inherited—purging Mbochi officers while constructing an independent presidential guard. These moves infuriated the army, fed the rise of militia groups, and ultimately contributed to Congo’s failed democratization and descent into civil war.

Taken together, these patterns strongly suggest that policymakers should pay close attention to the security sector, and how they sequence reforms, when promoting democratization. De-stacking African militaries before founding elections greatly facilitates liberalization and successful turnovers in power. While leaving ethnic armies risks coups, destabilization, and the return of dictatorship.

Kristen A. Harkness (@HarknessKristen) is a Senior Lecturer in the School of International Relations at the University of St. Andrews.