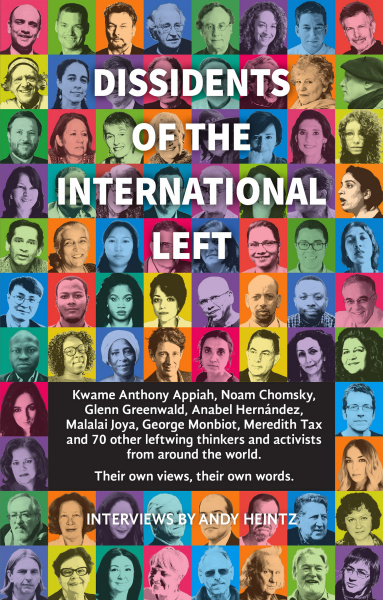 Any article proposing possible ways to create durable and equitable democracies in Africa should be humble in its goals. A cursory glance at the history of, say, Somalia and Botswana, Tanzania and the Central African Republic, Eritrea and Ghana reveals why understanding the politics of a country requires studying that country’s history as opposed to projecting untested assumptions onto an entire continent.

However, I hope the Africa-centric interviews featured in my book – Dissidents of the International Left – help to spark dialogue on important issues facing people on the continent. The issues the interviewees tackle in the book include gender equality, solving the legacy left by indirect colonial rule, the confining nature of cultural and civilizational talk, Eritrea’s democratic diaspora, governmental corruption and religious extremism in Nigeria, the Afrika Youth Movement, the strengths and weaknesses of regional and international interventions to stop genocide and crimes against humanity, religious fundamentalism as a political project, and the role of international human rights organizations in Africa.

Some of those interviewed in the book are widely known, such as Farid Esack, Mahmood Mamdani, Sara Eltantawi, Fatou Sow, Marieme Helie Lucas, and Alex de Waal. Other interviewees may be of slightly lesser fame, but were just as insightful, including Leo Igwe, Chidinma Perpetua Chikwelu, Lekan Latubosun, Anissa Helie, Tesfagabir Ghebre-Egziabiher, Sodfa Daaji, Susan Sebit, Hassan Avdullahi and many more.

Public intellectual and scholar Mahmood Mamdani discusses what he describes as the British colonial project of indirect rule (also knowns as decentralized despotism) and its present consequences for postcolonial unity in African countries. The Ugandan-born academic argues that by promoting a divide and rule strategy that turned local people into citizen’s and subjects colonial powers were able to fragment resistance to solidify their rule in African nations. To achieve this, British colonial powers created two types of authority: one based on race and the other based on ethnicity or, in their words, “tribe”. Mamdani argues the legacy of indirect rule must be confronted for African countries to unify and chart their own course, which is free from the trappings of the past.

It is an argument that – in my view – deserves much thought and contemplation among civil society and political leaders in Africa. If , interethnic, interfaith and inter-racial (racial being a political, social and cultural invention as opposed to a scientifically valid term) conflicts still persist based on past history, there must be attempts to cultivate a sense of unity and shared ownership of the country. One way to promote this is to create political, civil, and grassroots institutions which are committed to peacemaking, reconciliation, demobilization, and the reintegration of previously hostile or discriminated communities into mainstream society.

Dissidents also address the idea that certain values and ideas are intrinsically Western while others are African or Islamic in Muslim-majority countries. Sodfa Daaji, co-coordinator for the Afrika Youth Movement and chairperson of its gender equality committee, argued that those supportive of a status quo deny women equal rights and/or opportunities in the name of tradition. At the same time, she also claims that her views do not represent an effort to Westernize Africa.

“I explain to them my right to be free as a woman isn’t solely a Western right; it is a universal right,” she said. Daaji, an Italian citizen who was born to a Muslim family in Tunisia, argues traditions must also be challenged because certain abominable practices such as genital mutilation are justified in their name.

“It is time to re-elaborate tradition and religion and really understand what is good, what is bad, and what can be used to empower women and gender equality,” Daaji said.

By calling for widespread gender equity and equality, Daaji is not only promoting the expansion of democracy in the family and the workplace – she is also attempting to expand democracy in African countries in the same manner as women’s rights activists helped expand democracy in the United States. The notion that gender equality somehow represents the imposition of Western values on African society is similar to those who opposed feminist groups in the United States by claiming the mantle of tradition and religion.

Marieme Helie Lucas, Anissa Helie and Fatou Sow – all passionate advocates for women’s rights and secular governance – criticize local leaders and religious extremists in their native countries of Algeria and Senegal, respectively, for trying to marginalize women’s voices, autonomy and rights in the name of tradition and religion. Still, they also criticize the diverse group of political thinkers in the West. The latter lump them into civilizational and cultural boxes based on geography in the name of so-called Islamic or African civilization, or, paradoxically, in the name of fighting racism and discrimination.

They argue some Western progressives and human rights organizations place everyone living in African Muslim-majority countries into one religious box based on geography in the name of fighting anti-Muslim bigotry, while those on the right and the far-right place them into boxes to make a case for the superiority of so-called Western culture (often perceived as white culture by far-right groups).

In my conversations with them, Helie Lucas, founder of Women Living Under Muslim Laws (WLUML), Sow, international coordinator of WLUML, and former Coordinator for Francophone Africa of the Network Development with Women for a New Era (DAWN), and, Helie, associate professor at John Jay College of Criminal Justice, all emphasized how categorizing large groups of people based on one attribute (religion, region, ethnicity, nationality, gender, sexual orientation, etc) obscures the numerous identities held by all individuals and gives assistance to those attempting to reduce people into singular, reductive identities for politically self-interested reasons. They persuasively argue that secular governance and gender equality are universal values that have historically been practised by feminists and others in the same manner as have been practised by feminists in the so-called Western world.

In our interview, Helie Lucas noted, “The underlying assumption is that progressive people and secularists in Muslim majority countries are not representative of their people; that they are illegitimate. This is a denial of historical facts …

… Some years ago, we collectively gathered material on ‘Our Great Ancestors’ – feminists in Muslim contexts – and we found many examples of great feminist figures. The research showed how similar the demands have been across the centuries: education for girls comes first, then economic independence, the right to manage one’s own assets, properties and finances, freedom of movement, the right to marry someone of one’s choice, the right not to marry and to embrace celibacy …

… Marriage contracts were negotiated in ways that most Western women today could not even imagine were available to women in Muslim societies (restriction on polygamy, right to initiate the divorce, guardianship of children upon divorce, and so on). We can really prove that feminist struggles are indigenous to Muslim contexts.”

The Strengths and Weaknesses of International Intervention

Another contentious subject the book explores is the legitimacy of international or regional intervention to stop war crimes, crimes against humanity and genocide. Western intervention in Libya to overthrow Muammar Gaddafi and its aftermath is discussed by several interviewees both in the African and the American sections.

Sow, who described Gaddafi as an “undemocratic dictator” and a “hateful person”, criticized the NATO countries – in this case, France, Britain and America – for ignoring the African Union’s support for increased diplomatic efforts to reach a political settlement.

While there are legitimate reasons to criticize the approach taken by these foreign powers, critics of this critique, such as Shadi Hamid of the Brookings Institution, offer an alternative theory supporting the intervention. He notes how the intervention occurred after somewhere between 1,000 and 2,000 civilians had been killed, and Gaddafi had called protesters “cockroaches” and vowed to cleanse Libya “inch by inch, house by house, home by home, alleyway by alleyway.”

Alex de Waal and others have offered persuasive cases against the military overthrow of Gaddafi, noting that there was a chance for negotiations with the tyrannical leader after the objective of protecting civilians in Benghazi had been achieved in the first 24 hours of NATO airstrikes. He notes there was a failure to secure the stockpile of weapons accumulated by Gaddafi’s regime during his four decades in power. Additionally, there was a lack of attention to militant extremist and terrorist groups involved in the rebellion.

While safety mechanisms should have been put into play to protect citizens in Benghazi, the lack of cooperation between NATO, the United Nations, and the AU, combined with a lack of planning for the aftermath of the conflict – led to the undermining of the eventual development of democracy in Libya – helped enable civil war, human trafficking, a hotbed of terrorist activity, and violence that has spilled over to other countries.

Farid Esack, author, liberation theologian, and former gender commissioner for the South African Government, discusses the strengths and weaknesses of South Africa’s democracy. While he lauds a free press, an independent judiciary, freedom of religion, gender and sexual equality and a vibrant civil society as the post-apartheid government’s biggest successes, he cites growing inequality, poverty and the crime rate as the biggest failures.

Tesfagabir Ghebre-Egziabiher, an Eritrean activist for human rights and democracy in Eritrea, who lives in South Africa, discusses the prospects for democratic change in his native country, as well as how the country’s successful struggle for independence was transformed into a totalitarian dictatorship that has been called the North Korea of Africa. It is, perhaps, the most extreme example of the importance of noting the authoritarian tendencies of the elites in liberation movements to ensure that liberators do not turn into tyrants.

Using the Past to Understand the Present and Shape the Future

Dissidents of the International Left aspired and hopefully, to a certain extent, succeeded in pointing out how past policies and certain entrenched prejudices and traditions have helped and hindered political and economic development in many African countries. In addition, the book maps out solutions to problems that have been at the epicenter of past within-country conflicts and obstacles with the hope these political, cultural and economic minefields can be “de-mined” to prevent future tragedies.

Dissidents is by no means an attempt to provide a comprehensive look at the complex politics and histories that underly the fabric of a country, much less an entire continent as politically, geographically, ethnically and culturally diverse as Africa. There are many other books that take a deeper dive into some of the most pressing issues facing the continent and the countries that inhabit it. But I do hope Dissidents succeeded in convincing readers that African countries cannot be reduced to simple platitudes and one-theory-fits-all generalizations. Such simplicity will only blind people to the complex and ever-changing realities of life in the countries that make up the continent.

Andy Heintz is a freelance writer based in the American Midwest. His work has been published in progressive media outlets in the United States, Europe, India and the Middle East, including Foreign Policy in Focus, the New Internationalist, Muftah, The Wire, Common Dreams, Secularism is a Women’s Issue, Tikkun, Balkan Witness, Culture Project, Al-Jumhuriya, The New Arab, Europe-Solidaire, and CounterVortex. “Dissidents of the International Left” is his first book.

Russian mercenaries in Africa: Central African Republic and beyond