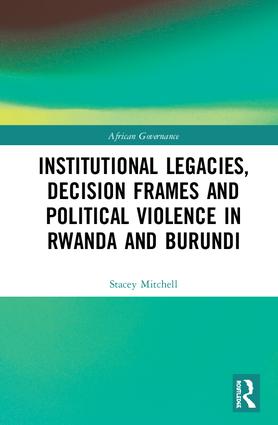 As part of our regular DiA Book Club series, which brings you the most important new publications on African politics, Stacey M. Mitchell introduce her compelling new book: Institutional Legacies, Decision Frames and Political Violence in Rwanda and Burundi – which brings institutions to the foreground as a causal factor of the genocide in Rwanda and the lack of genocide in Burundi.

Something has always perplexed me. Why did genocide occur in Rwanda in the early 1990s, but not in Burundi? Comparing the two countries side-by-side, they share a great many similarities. Both are small African republics of nearly equal size and population.  Each has a Hutu majority and a Tutsi minority. More to the point, Rwanda and Burundi were both strongly “encouraged” by the international donor community in the early 1990s to move from single-party authoritarian systems of government to multiparty democracies. The fact that both were simultaneously confronting a rash of serious economic and other domestic problems did not help the prospects for democratic success. In fact, resistance to reforms eventually led to coups d’état and presidential assassinations in both countries. However, genocide only occurred in Rwanda. In Burundi, the coup d’état led by a hardline faction of the Tutsi controlled military failed and a lengthy period of civil war ensued.

There is a second puzzle arising from the first. I noticed that studies that address collective violence in Rwanda and Burundi and theories that explain the relationship between communal violence and the process of democratization in Africa more generally could not adequately explain this variation in outcome. Some of this I associate with a simple lack of comparison. Studies written about the Rwanda genocide, such the Des Forges study, for example, only address conditions in Burundi—specifically, the assassination of Burundi’s first Hutu president-elect—in so much as they influenced the rise of the Hutu-Power movement in Rwanda. They fail to delve much deeper than that.

Also troubling is the tendency of these studies to assume that a combination of ethnic-hatreds, poverty, economic downturn, civil war and so forth prompted extremist political elites and party cadres in Rwanda to select genocide as a rational policy response to shared rule with the Tutsi. The odds of success, measured in the re-establishment of a system of absolute Hutu rule, were slim to none. What was more likely to occur was that the extremists’ efforts to annihilate the Tutsi population would reignite the civil war with the Rwanda Patriotic Front (RPF) and subsequently lead to their (the extremists’) defeat. So, why choose genocide at all?

In Institutional Legacies, Decision Frames and Political Violence in Rwanda and Burundi, I approach the subject of political violence in Rwanda and Burundi from a different perspective. For one thing, I bring institutions to the foreground as a causal factor of the genocide in Rwanda and the lack of genocide in Burundi. Environmental factors still do matter, but I suggest their impact on political elites was influenced by existing and pre-existing formal and informal institutional arrangements in each country. If a country has at least some experience with shared rule and/or some evidence of cross cutting social cleavages in society, democracy may stand a better shot. The converse is also the case. I include informal institutions—civil society, patron client systems—to bolster the argument by Putnam  and others that social capital bodes well for democracy. This argument also fits with studies by Bratton and van de Walle and others that suggest that institutional foundations matter for the health of democracy in Africa. However, the question arises, how do we know institutions (democratic or not) have the impact they do on political elites in Rwanda, Burundi or anywhere for that matter?

Answering this question required the use of an integrative approach that included a decision-making model, and which combined two distinct, but compatible theories: historical institutionalism and prospect theory. Consistent with the core assumptions of both, the results of a most similar systems analysis demonstrated that an institutional legacy characterized by an asymmetrical distribution of power between groups induces political incumbents to perceive joint-rule from the domain of losses. According to Kahneman, Knetsch and Thaler among others, people are more sensitive to losses than to gains. Under certain conditions, this sensitivity may push an individual to favor more risk-seeking behavior as a means to reverse their bad circumstances.

I suggest that these “conditions” are institutional experiences. For Rwanda institutional legacies of exclusion and discrimination heavily influenced the manner in which multiparty rule was perceived by incumbent Hutu elites.  The Mouvement Républicain National pour la Démocratie et le Développment (MRND), the Coalition pour la Défense de la République (CDR) and others simply could not accept the idea of sharing power with the Tutsi. Rather than attempt to “wait it out” and possibly regain power within the new system of government, they elected instead to embark on an all-or-nothing gamble to take back control of the state.

So why did things work out differently in Burundi?  Studies by  Lemarchand, for example, indicate that Burundi has a long tradition of shared power at the formal level and informal institutions conducive to the formation of cross cutting social cleavages. An ethos of cooperation persists in Burundi even during the years of authoritarian rule. These foundations for democracy, such as they were, increased the likelihood that the new multiparty system would be perceived by political actors from the domain of gains. As per prospect theory, a gains frame of mind induces decision-makers to opt for a risk averse option, a “safe choice.” For Burundi, this meant that political elites from the Tutsi president to members of the Hutu opposition envisaged multiparty democracy as a gain overall for the country. To keep the peace, they opted to cooperate. Although the system crashed in 1993, scholars including Reyntjens, Vandenginste and others document Burundi’s continued efforts to instill a working power-sharing system of rule.

Stacey M. Mitchell is an Assistant Professor in the Department of History and Political Science at Georgia State University.