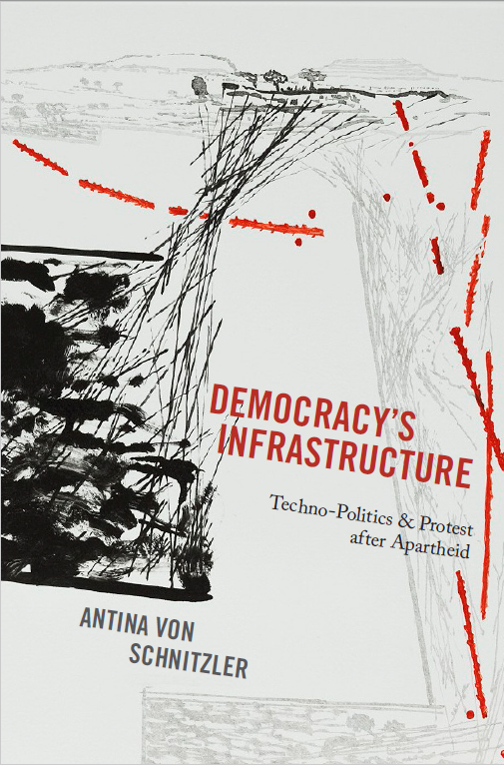 In this edition of our popular DiA Book Club, Antina von Schnitzler shares thought-provoking insights from her book, Democracy’s Infrastructure. Read more to understand how seemingly apolitical issues like water pipes and utility meters are sites of political struggle in South Africa – and how they can be in other African countries.

Ten years after the end of apartheid, in 2004, South Africa began to be rocked by waves of protests . Most were over housing and the poor provision of basic services such as water or electricity. The sheer number of such protests in the years that followed has led commentators to call South Africa the “protest capital” of the world. Less visibly, the post-apartheid period has witnessed widespread illicit acts involving infrastructure, such as the non-payment of service charges, the bypassing, tampering or destruction of utility meters, and illegal connections to services, such as water or electricity. Such protests and popular illegalities often uncannily resemble the tactics of the anti-apartheid struggle. Yet, in the aftermath of liberation, they lack the political languages of the struggle that gave them meaning and legitimacy in the past. Instead, they are today often framed as irrational, amoral or criminal acts. Thus, they become the responsibility of the courts or a diverse array of experts, including engineers, utility officials or local bureaucrats.

Democracy’s Infrastructure explores the centrality of urban infrastructures – such as water pipes, electricity grids or utility meters – as sites of political struggle in South Africa from the late apartheid period to the present. In the paradoxical context of liberation and liberalization in which citizenship has been extended to an unprecedented number of people at the same time as the entitlements conferred by citizenship are increasingly in question, the book examines the techno-political forms and registers at which contemporary conflicts unfold and in which claims on the state are expressed.

Based on archival and ethnographic research in Soweto and Johannesburg, Democracy’s Infrastructure examines how administrative links to the state – infrastructural, fiscal and judicial links – became a central political terrain during the anti-apartheid struggle and how this terrain persists in the post-apartheid present. The book tracks the continuity of this techno-political terrain by following the life of a small, mundane piece of technology – a prepaid meter. Since the late apartheid period, prepaid meters have been widely and often controversially deployed in South Africa’s townships to curb the widespread non-payment of service charges that began during the anti-apartheid rent boycotts. Rather than being simply devices that increase efficiency, as utility officials often argue, my book shows that prepaid meters have a techno-political history in South Africa directly bound up with the liberation struggle. First invented in Victorian Britain as a tool of working class “improvement,” apartheid-era engineers re-developed the meter at the height of the anti-apartheid struggle in 1980s as a device to end the rent boycotts. Thus, the prepaid meter became, as one apartheid era local bureaucrat told me, a “political technology.” Ironically, it is this techno-political history that has made South Africa one of the leaders in the development of prepayment technology after the end of apartheid. In South Africa today, prepayment technology is ubiquitous. From cell phone service to electricity and more recently water, “living prepaid” has become a widespread, and increasingly normalized condition. And yet, given their capacity to automatically disconnect users from services, prepaid meters continue to be controversial, subject to protest and, in the case of water, a constitutional court challenge.

The book’s primary ethnographic site is “Operation Gcin’amanzi” (Zulu for “Save Water!”) a controversial large-scale project initiated by the corporatized utility company Johannesburg Water to install prepaid water meters in all Soweto households. While framed in a global language of sustainability,  the project was also a technical solution to the mass non-payment for service charges in the townships that began during the anti-apartheid “rent boycotts” in the 1980s. In my ethnography of the implementation of the project and the protests against it, I explore how infrastructure became a terrain for the mediation and articulation of long-standing questions about the promise of citizenship at the paradoxical juncture of liberation and liberalization. The book follows engineers, city officials, activists and Soweto residents, as they grapple with the meter and the constraints it imposes.

Tracing the social life of a small technology across time and space, Democracy’s Infrastructure explores the diverse, and often subtle ways in which technics, politics and ethics are weaved together in this battle over payment, civic virtue, and, ultimately, the post-apartheid condition.

Given the normative locations of politics are often de facto inaccessible to especially poorer residents of townships and informal settlements, the book attends to a politics that takes shape in unexpected locations and unfamiliar forms. In disputes over payment for service charges, water cut-offs or evictions, in the spectacular destruction of infrastructure during protests or the more silent bypassing of water or electricity meters, and the mobilization of legal and technical expertise, a different terrain of politics comes into view. Here, the political is mediated by different material and discursive forms. Thus, Democracy’s Infrastructure analyzes the diverse ways in which democracy is grounded in and stabilized by seemingly apolitical technical means that at times become the object of negotiation and protest.

While the story I tell in the book emerges from and is empirically grounded within the specific context of South Africa, this focus on a politics in unfamiliar spaces and forms enables a novel perspective on citizenship and the formation of political subjectivities elsewhere. This is particularly so in a post-Cold War moment in which modernist political idioms of popular sovereignty, social citizenship, and collective freedom have lost some of their previous resonance and numerous questions have arisen about the ability of the formal political sphere to effectively represent citizens’ multiple desires and demands. It also suggests that scholars and practitioners interested in democracy in Africa look not only to the formal domain of electoral or party politics, but also to less visible, seemingly apolitical spheres as locations where popular politics unfolds and citizenship is expressed, negotiated and claimed.

Antina von Schnitzler is an anthropologist and assistant professor in the Graduate Program in International Affairs at The New School.