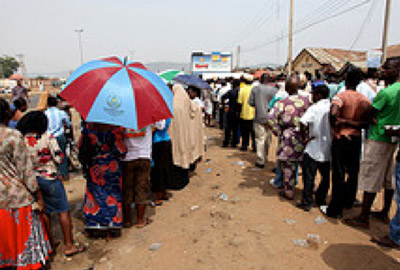 Co-Editor SJ Cooper-Knock explores Buhari’s victory and the questions that remain, as the nation goes to the polls once more for the Governorship and House Assembly.

After a delay in February, and an extension in voting time, the election results in Nigeria were finally released on 31 March: Muhammadu Buhari defeated Goodluck Jonathan by gaining 54 per cent national vote and more than 25 per cent of the vote in two thirds of the country’s states. Ultimately he emerged with  2.7 million more votes than the incumbent.

This is an historic outcome in Nigeria: the first time that voters have displaced a sitting President since the re-introduction of elections in 1999. After sixteen years of rule, the Progressive Democratic Party (PDP) is no longer in power.

Such a result is also unusual in the continent as a whole. As Co-editor Nic Cheeseman has argued, when incumbents run for re-election in Africa, they win over 85% of the time. Usually, they garner over 60% of the vote.

Some commentators have argued that Boko Haram’s violence in the North East explains Buhari’s victory. Certainly, Buhari’s military past has been an integral part of his appeal – a former Major General in the Nigerian Army, he came to power for 20 months in a coup in 1983 and he has used his military credentials as evidence that he could, and would, take a harsher stand against Boko Haram than Jonathan.

It is also true that with each major Boko Haram attack, Goodluck’s support in the region fell substantially. In May 2014, for example, when 900 died in Boko Haram attacks, the President’s ratings dropped by 18 percentage points. In Borno, the state in which 276 schoolgirls were kidnapped in April 2014, 233,000 voted for Buhari, whereas only 14,000 vote for Jonathan. The nine states where Boko Haram have killed over 100 people represent less than a quarter of those who voted, but more than a third of those who voted for Buhari.

That said, we should not over-emphasise the electoral importance of Buhari’s stronghold in the North of Nigeria. These are predominantly Islamic states and Buhari is seen as a strong Muslim candidate. Consequently, northern areas could have been expected to rally behind him, as it did to varying degrees when he unsuccessfully stood for the presidency in 2003, 2007, and 2010.

The key differences between those unsuccessful runs and this one was support that Buhari garnered elsewhere: he expanded his hold in north central beyond Niger to include substantial portions of the vote in the states of Kogi, Kwara, and Benue. With the exception of Ekiti, he also won all the south-western states. Previously, Buhari had not managed even a quarter of the votes in the states of this region. Ultimately, it was these alliances with regional power-brokers (inside and outside the ruling party) that proved crucial.

So, what can we expect in the wake of this remarkable electoral outcome?

The immediate aftermath was positive. Fears of election-related violence from Boko Haram or supporters of the losing candidate had been widespread; many foreign companies evacuated their employees from the country. Jonathan’s peaceful concession of the elections, however, forestalled a repeat of unrest that followed Buhari’s defeat in 2011 in which 800 were killed. Whilst there have been some fatalities across the country, commentators lauded the relatively peaceful transfer of power. Many also looked back more favourably upon the Independent National Electoral Commission’s decision to postpone elections by six weeks for the sake of security in March.

The longer term is less certain. For starters, commentators are worried about what Buhari may be willing to sacrifice in his quest to tackle Boko Haram.

Given the salience of Boko Haram during this election, Buhari’s militarised rhetoric on the campaign trail was unsurprising. ‘We shall spare no effort’, he proclaimed, ‘until we defeat terrorism’. Now he is in power, citizens and commentators wait to see how democratic or otherwise those efforts might be.

Whilst he was in office in the 1980s, Buhari may have put senior politicians in court on corruption charges but he was far from a bastion of good governance. In the commentary following this election, many have recalled the imprisonment of Nigerian musician Fela Kuti by military tribunal but have failed to highlight how systemic Buhari’s autocratic tendencies were. During his twenty-month rule, he allowed the security sector to detain citizens for up to three months without charge, clamped down on free speech, and launched a ‘campaign against indiscipline’, which directed the police to whip those who were late to work. In recent years, Buhari has claimed to be a born-again democrat but many are unsure of how broad and deep this commitment to liberty will be now he is in charge.

Moreover, for all that Boko Haram monopolised the campaign trail, the group does not have a monopoly on the creation of insecurity in Nigeria. Similarly, security cannot simply be achieved through military might. Drivers of insecurity in the country are deep, diffuse and entangled. To highlight one issue amongst many: Prior to the rise of Boko Haram the prime conflict area in Nigeria used to be the Niger Delta. In a previous attempt to disarm the area, militants were offered training, employment, and a monthly stipend of $400. This programme is now coming to an end, as the government states that it can no longer afford it. The future of (in)stability in the area, where party political allegiances are mixed, seems uncertain.

Nor is security the only issue that Buhari faces: decreasing oil prices in a heavily oil-dependent state and entrenched issues like corruption will continue to raise questions about the economic future of Africa’s biggest economy. As a recent Forbes report stated, ‘the drop in the budget oil price for fiscal 2015 compared to 2014 implies a one third drop in fiscal revenue, there is almost nothing left in the country’s excess crude account, foreign exchange reserves are dwindling and the country is insufficiently diversified beyond oil’. The economic challenges that Buhari faces are formidable.

Buhari’s economic choices in 1980s do not give us many clues about his current plans. Back then, Buhari publicly broke from the IMF, although he later imposed IMF prescriptions more virulently than the international financial institution itself had suggested. Described by Nigeria’s Nobel Laureate Wole Soyinka as an ‘economic illiterate’ many of his choices this time around are likely to be guided by the advisors and ministers than he choses. And, as we enter the second week after the election, speculation is growing around Buhari’s cabinet, particularly when it comes to the issues of economic policy and resources management. In Jonathan’s government, the Finance Minister Ngozi Okonjo-Iweala was held in high regard. Choosing a strong replacement is an important challenge. That said, Jonathan’s exit also opens up space for individuals like Lamido Sanusi – the central bank governor that he fired – to move back into the upper echelons of government. We can also expect to see electoral strategists like outgoing Lagos Govenor Babatunde Fashola, Rivers State Govenor Rotimi Amaechi, and APC movers and shakers like Bola Tinubu and Atiku Abubakar playing a prominent role. Amaechi, a defector from the PDP, is amongst the favourites for appointment as Petroleum Minister. Whilst technical prowess will be one element of Buhari’s decision making, his cabinet will also have to appease the powerbrokers who facilitated his election.

This wrangling over cabinet positions and the Govenorship and House of Assembly elections today are ultimately a reminder that the president plays an important but limited role in governing Africa’s most populous country. Politics is a complex game with numerous players and many prizes. If we want to understand how (and to what extent) democracy functions, we must keep our eyes on all of them.